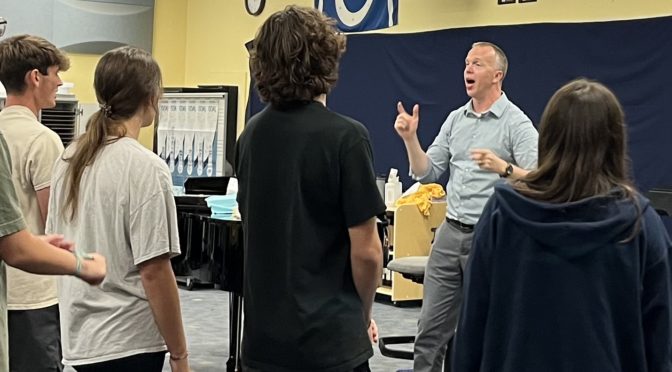 GC choir director Paul Grizzard has always loved music, and has been teaching music since 2002. He constantly strives to help students grow better musically and learn to truly enjoy the beauty of music. “You might have kids who are learning to be themselves and kids who are used to seeing the teacher as the bad guy,” said Grizzard, “I try my best to change that mindset so that you have kids who do something because they want to be good.” For him, choir is something to get excited about, something you can enjoy, and he wants to help the students feel that way too.

For Grizzard, music has always been part of the family. When he was a kid, his mother taught voice lessons out of their house, and he began directing their church’s choir when he was seventeen. After college he moved out to Boston to see the world. After that he moved up to Rushville, and eventually came to Greenfield. “I love students in Greenfield. I really do.” Grizzard says, “Greenfield is just a good balance; we have good-natured kids. The talent level is very good here, and it’s just generally good kids, who make me look forward to my job every day.”

When describing his favorite parts of teaching, Grizzard says, “I just love that I can be dumb every day. I love sometimes doing silly things and just being myself, or trying to get kids excited about music. If you’re doing adult choir or things like that, you miss that aspect of it. So students always make my job different every day, and exciting, and it’s something I look forward to.”

Grizzard goes on to explain the challenges of teaching choir, how he’s constantly trying to find the balance between those who love choir, and those who only do it for the credit. “I try to find the balance where it’s a fun class atmosphere that kids look forward to but also they know the limits.” He wants most for the students “to know that I care for them, and that I love them, and that we need more of them in the world. And I think through that comes excellence, because then I think if kids feel that connection, if kids feel that their voice is being heard, and that they can be part of something bigger than themselves, then that’s when I think we are great.”

Matthew Royster, a senior in Madrigal, talks highly of Grizzard. “He is really good at motivating the choir to the point where we’re really good while still keeping the class really enjoyable, and I think that’s a really good quality of him as a teacher.”

Ariana Bell, a junior in Madrigal, also has high compliments for Grizzard. “He is a really great choir director. I feel like he really gets everything across really well, just really shoots for a good choir sound. He wants his music to sound good. He wants us to improve. I think I really like whenever we do something perfectly, especially on the first try, and you know, maybe he’s plucking out some of the notes on piano while we’re singing, and then as soon as we finish he looks up with this big grin, and he gets so excited.” Bell says with a smile on her face.

For Grizzard and his students, choir is more than just a class, it’s a community. “I enjoy the memories that we have,” says Bell. “We have a lot of fun times together. A lot of jokes, a lot of sarcasm, but a lot of stuff done, and every once in a while it gets deep. I just love all the memories that we have in the class.” Royster adds on to this: “The thing I enjoy most about choir is just the community that forms between me and the other people in my choir, because especially with Madrigal, I’ve been in choir with a lot of those people for four years now, since Freshman Men’s choir, and it forms a really good community of experience.”

“I want [my students] to know that there’s people who care about them and want the best for them, and hopefully I make that evident in my teaching.” says Grizzard, reflecting on his greatest hopes for GC students, “ And I think through that comes excellence, because then I think if kids feel that connection, if kids feel that their voice is being heard, and that they can be part of something bigger than themselves, then that’s when I think we are great.” 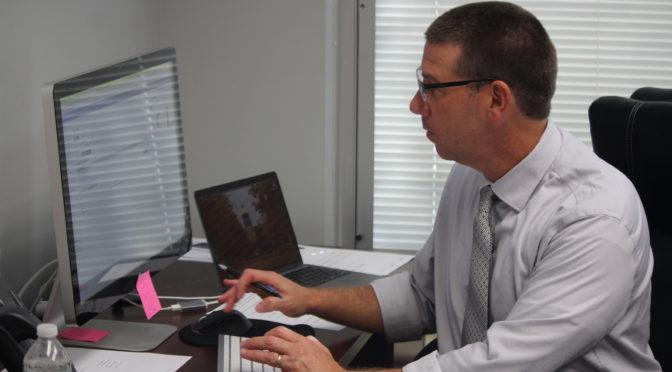 Mr. Steve Wherry, a new assistant principal at GC, was previously the principal at Knightstown High School. He used to be a math teacher here at GC before leaving to go to Knightstown. Mr. Wherry came to GC to be closer to his family. His daughter is a senior here at GC and this move helped him get on the same schedule as her. Mr. Wherry stated, “I’ve spent a lot of time in Knightstown on their schedule which caused me to miss vacations and trips.”

Mr. Wherry said he wants to learn names and grow relationships with students here at GC. It seems like he has already been starting.  “I do love how he has learned names and faces,” stated Mrs. Coleman.

When asked about why Mr. Wherry is an administrator, he stated, “I already had been taking my courses for it, and when the opportunity came I didn’t look back, I just went for it.”

“I look forward to the level of competitiveness (in sports),” stated Mr. Wherry while we talked about what he is looking forward to. He said he liked the amount of people who were involved. “I enjoy seeing different opportunities here,” Mr. Wherry said.

When asked about going from a principal to assistant principal, Mr. Wherry said he didn’t have a big ego, so he didn’t mind working under a principal he respected. “There is no ego in Mr. Wherry. He just wants to show up and make GC a better place,” stated Mr. Cary.