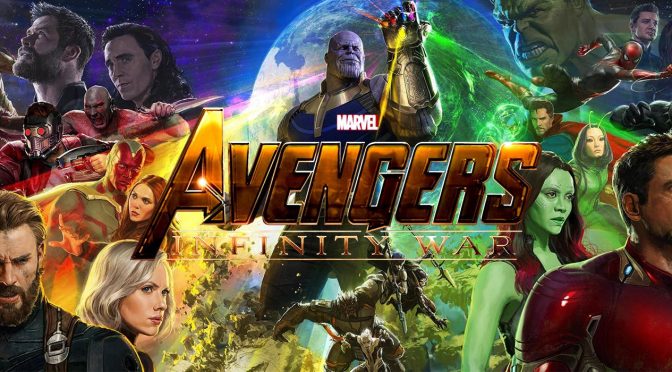 Imagine half of the universe gone with the snap of someone’s fingers. Now imagine that that someone is none other than the most powerful being in the universe and you, with the help of some of your colleagues, have to defeat him. This is the premise of the movie Avengers: Infinity War.

Infinity War stars many heroes from the other Avengers movies, as well as heroes from other movies. Robert Downey Jr. as Iron Man, Chris Evans as Captain America, and Chris Pratt as Star-Lord are just a few actors of the all-star cast in Infinity War.

The movie takes place some time after the last Captain America movie, Captain America: Civil War. At the end of Civil War, the Avengers split up due to conflicting ideas of how to deal with a multitude of problems. When Infinity War takes place, the group is still in shambles. However, when Thanos, played by Josh Brolin, tries to eliminate half of the population of everywhere, The Avengers must reunite to take him down.

The entire movie revolves around Thanos trying to kill half of the population so as to eliminate the ever-increasing problem of overpopulation. The movie stars Thanos as less of a villain, but more of a misunderstood hero, who truly believes that the answer to overpopulation is to kill half of everybody. He tries to complete his goal by collecting all of the infinity stones, all of which contain great power.

The movie is loaded with everything you would want to see in a superhero movie. It has a powerful hero, and an even more powerful villain. The battles were very epic. All in all, the movie was good. My only complaint would be that the movie ends in a large cliffhanger. I won’t tell you what the cliffhanger is, but I will state that the movie has an obvious sequel. The sequel is unnamed for right now, but will be coming out in  2019. The next movie is a must-see for people who watched Infinity War so they can know how the amazing saga ends.

To get a better understanding of the Avengers saga, you should see the previous movies. As Infinity War combines almost all of the heroes from many different movies, following the routine of viewing all the other movies might be a difficulty. The big movies that should be watched to fully understand Infinity War include: Doctor Strange, Spiderman Homecoming, Captain America: Civil War, Thor: Ragnarok, and Guardians of the Galaxy Part 2.