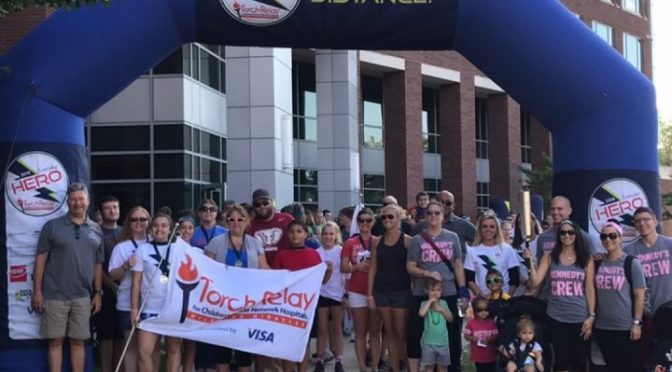 ESPN anchor Stuart Scott once said during his fight with cancer “You beat cancer by how you live, why you live and in the manner in which you live.” October is Cancer Awareness Month, and several volleyball players wanted to support the cause.

The walk got the team involved in the community. Anastasia Papadopoulos, 11, said, “I like the fact that GC JV Volleyball can go out into the community and show that we are more than just a group of girls focused on the sport. We are very much a team that is about community involvement and an event like this is a great opportunity to show that we care about our community and enjoy giving back just as much as we love being on the court.”

The team believed that more teams should get involved in the community. Silcox stated, “I think it would be great if all sports could do something like this instead of just focusing on sports they will get a chance with helping others as well.” Papadopoulos confirmed this when she said “I think that the chance to show involvement in the community is important for every team. Scheduling and availability is sometimes difficult for many teams, depending on when opportunities arise during the season, but if teams are available then I 100% believe it’s an amazing thing all the teams at GC should strive to be involved in.”

The team appreciated the chance to be able to show their support for children who have been diagnosed with the disease and at the same time bond and have fun with their team. Papadopoulos said, “As a team, we always focus on being the best we can be, and having the opportunity to give other people a chance to do that is something that is very appealing to the JV team. We also have a saying, ‘There is no I in team’ and being able to show the kids with this disease that they aren’t alone and will be supported with a team of people is an important part of fighting such a tragic diagnosis.”