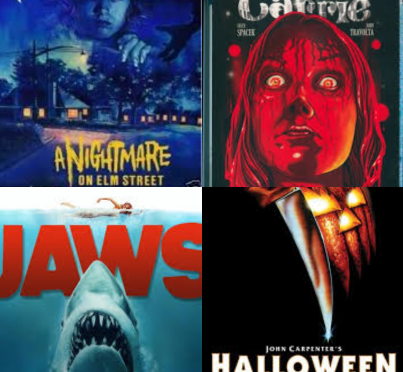 Halloween; a mix of crisp weather, trick or treating, and best of all, scary movies. Horror movies from the 1960s to the 1980s are still relevant because of their superior scares. The following films will be ranked from the worst to the best. With movies such as The Texas Chainsaw Massacre and Carrie, this list will be filled with gory and eerie choices.

The 60’s through the 80’s were filled with scary movies that leave goosebumps on arms and standing hairs on the back of necks. The Birds is a classic movie about a woman who meets a man at a pet store. She leaves him with two love birds, which resulted in crows attacking the town, and eventually, the woman. The movie, released in 1963, was directed by Alfred Hitchcock, who is also known for Psycho, Vertigo, and Rear Window. Another classic would be Willard. The movie, released in 1971, is a thriller about a man who trains rats to kill for him. Willard, the man, befriends a colony of rats. Socrates and Ben are the two most well-known rats that play important parts in the psychopathic lifestyle of Willard.

The 1970’s were filled with hair-raising classics that are still being watched today. The Texas Chainsaw Massacre is a well-known movie that has been made into many separate movies. The main characters, Sally and her paraplegic brother Franklin, head up to their grandfather’s grave which has been vandalized. There, they meet a group of murderous psychos, who want nothing else but to torture and kill the two. Leatherface is introduced as the main murder character. He wears a mask made out of human skin and murders unsuspecting victims with his chainsaw.

Jaws is an additional classic made in 1975. The movie stars a killer shark who eats his victims and shows no mercy. Jaws now has five movies that contain the same bloody cruelty as the first.

What do you get when you mix a teenage girl with telekinetic powers? Carrie was released in 1976. Carrie, a teenage girl who is bullied in school and by her mother, develops telekinetic powers that turn deadly. The movie has been remade multiple times with twice as much blood and gore. One of the most popular movies from the 70’s would have to be Halloween. The movie starts out with 21-year-old Michael Myers escaping from custody of the police. He then goes back to his hometown of Haddonfield, IL, where he seeks out his next victims.

“They’re here!” Carol Anne is known for the famous line in Poltergeist, one of the most popular horror movies of the 80’s. Made in 1982, Poltergeist gives a look into what happens when 5-year-old Carol Anne is swept into a world of terrifying ghosts and bright lights. When Carol Ann is taken by the spirits, the Freelings are forced to communicate with their daughter through the television. When getting nowhere on receiving Carol Anne back, the family must turn to a group of trained exorcists.

“Whatever you do, don’t fall asleep.” Nancy Thompson dreams herself into a world of nightmares coming to life in the 1984 slasher film A Nightmare on Elm Street. Freddy Krueger, the antagonist, preys on teenagers and kills them in their dreams. A death in a dream equals a death in reality. Nancy’s parents and their friends are the key to solving the mystery behind the razor clawed fiend. What happens if Nancy doesn’t solve the problem? Watch the movie and find out!

After reviewing the results to the survey students of GCHS took, the chilling results are in! “Why are you screaming?” A Nightmare on Elm Street tops the favorites list with only a 8% difference from the second place tie of the slasher Halloween, the exorcist legend Poltergeist, and bloody Carrie. In third place we have the chainsaw-swinging Leatherface in The Texas Chainsaw Massacre. Fourth place goes to the man-eating shark, Jaws. Fifth place goes to the well deserved psychopathic rat trainer, Willard. Last place goes to the killer crows in the 1963 classic, The Birds. Hopefully they don’t seek revenge on you.