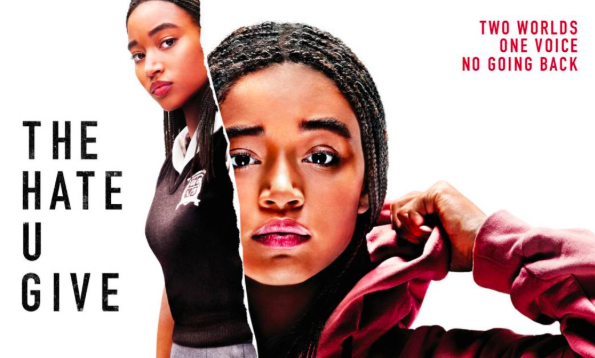 Full of emotion and heart-warming moments, The Hate U Give describes one sixteen-year-old’s life and two substantially different worlds. As the story develops, this eye-opener movie brings out the issue of social inequality and crime in today’s society.

Amandla Stenberg acting as Starr Carter is locked between two worlds, the poor and the wealthy. The main character, Starr has been attending a private school called Williamson for six years and has maintained a reputation as a successful student. When the school bell rings at the end of the day, Starr releases herself from her preppy school life and travels back into reality.

In the beginning, Starr attends a party where she reconnects with her childhood friend, Khalil. After the party, Khalil offers Starr a ride home. After failing to signal while changing lanes, the two get stopped by a police officer.

The officer makes Khalil wait outside while he goes and checks his vehicle information. After reaching down into his car to check to see if Starr is content, Khalil is shot and killed by the officer.

After the tragic death of her friend, Starr exhibits signs of post-traumatic stress. Trying to speak up for Khalil’s death, Starr struggles to obtain a voice going against the police brutality that she witnessed.

Law enforcement tries to blame the killing on other factors, but Starr is the only one who knows the truth. Encouraging Starr to take a stand for justice, her friends and family comfort and support her.

Director George Tillman Jr recreates Angie Thomas’s novel with this drama-packed film. Not only has Tillman directed The Hate U Give, but also The Longest Ride, Faster and the powerful biography, Notorious. In addition, Tillman is known for his directing skills by exaggerating even the simplest of scenes with dramatic lines and lots of action.

The Hate U Give features many relatable moments, focused around today’s society as well as today’s music. The movie’s soundtrack includes “DNA” by Kendrick Lamar, “Everybody” by Logic and much more. The music contributes to the movie by expanding the audience’s emotions with all the action-packed scenes.

Amandla Stenberg presents this tremendous character who pulls the audience’s attention to her by fully expressing her emotions. The Hate U Give has hit the billboards hard and opened eyes to the topic of racial justice. In the end, The Hate U Give leaves viewers speechless as they exit movie theaters.