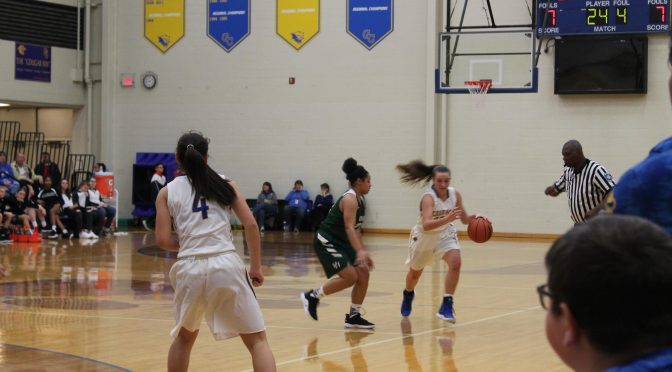 The girls’ basketball season has started and varsity has a good start so far, 3-2.

Hannah Farrell, 11, has said her personal goals for this season is to make the Indiana Junior All-Star team. She stated, “To achieve my goal, I need to have a strong season all year long.”  Farrell said that their team goal is to get into sectionals and win.

“They have always been a strong team, and there is always that conference rivalry,” stated Samantha Kihega, 11.

Kihega has been on varsity for 2 years. This is her first year of really playing the floor. Kihega said her personal goal for this season is to try and become a player that coach can count on. Basketball isn’t her only sport, but she does want to be someone that Coach Key can put in to do a certain job.

The Lady Cougars have prepared for the season by practicing really hard in the fall and also being diligent during the season. They have a new coach this year, Coach Bradley Key.  McIntire has had three different coaches in her four years of high school. She said that the changes have made them a stronger team. She said it’s been challenging but they’ve all stuck together and it’s worked out.

Kihega also mentioned some challenges along way this season.  “Developing to a new coaching staff (has been a challenge) because we aren’t used to any of it, and another would have to be that a lot of us try to do too much sometimes, when we should just do the simple things first,” Kihega said.

McIntire said varsity is challenging because of the pressure. “The games are faster, the team scouting is more enforced on varsity,” McIntire said.

“The season this far has been going pretty well,”  McIntire said. They still have things they need to work on, but most teams do. “We’re getting better everyday and will never stop getting better; that’s our goal,” stated McIntire.