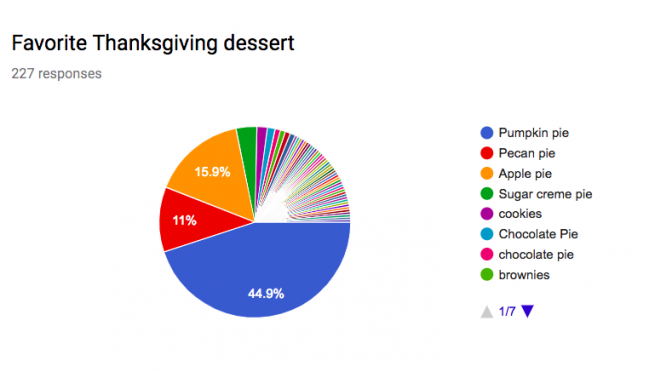 Christmas and Thanksgiving:  two times you can enjoy wonderful foods and some relaxation at the same time. This survey was made in order to celebrate traditions and the favorite foods of some of the more popular holidays. Whether it be turkey or  a good casserole, dinner traditions are something that are loved by many.

Funny traditions and memories are things that we look back and smile on. Some responses stood out among the rest.  “One time my uncle stuck his hand in the sink and when my grandma put the garbage disposal on, he was pretending that his hand was getting cut and taken off,” wrote one student after recalling a funny memory. Another student said, “A food fight between the kids of the family” was particularly unforgettable. Some of the most popular answers for most memorable Thanksgiving traditions were spending time with family or eating. “When I brought homemade Rice Krispies treats to Thanksgiving for the first time, and ended up with them too hard to eat and people still ate them,” was one student’s experience.

The most popular response to favorite December holiday tradition was decorating. Some of the other responses were, “Waiting until 6-7 a.m. and making cinnamon rolls. Then waiting till those are done, eating, and opening presents.” The best gifts that people said they got were money, video game consoles, or being with their families. The most popular place to see the lights is the Circle of Lights, and the second most popular choice was Christmas at the Zoo.