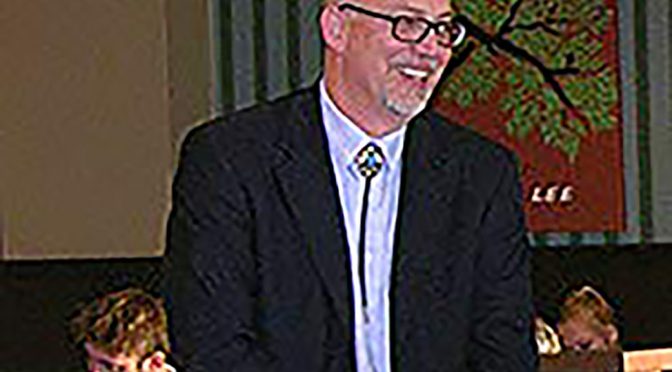 He won both the Western Writers of America Spur Award and the Will Rogers Medallion Award for Western Fiction twice. His books have been featured on the Best Books of Indiana list and have been translated and sold worldwide in Italian and Turkish. He has been nominated for a Derringer Award and won Elmer Kelton Fiction Book of the Year. No, this isn’t just any given author. These are the accomplishments of Larry D. Sweazy, an author and indexer that lives nearby in Noblesville, Indiana.

When he was a little boy, his favorite pastime was reading. This immense love for reading eventually sparked an interest in writing. “I loved books when I was a kid because I could escape and disappear, so I wanted to at some point figure out how I could do that for other people,” he said.

While he was in middle school and then high school, he discovered his interest in writing. The first piece of writing he ever wrote was a poem in eighth grade. His teacher told him, “You know, you’re a really good writer. You should pursue this, and get better at it.” This was the beginning of a pathway that would lead to a career.

As of now, Sweazy has published 14 books, eight westerns and six mysteries. Some of his most popular books are the ones included in the Marjorie Trumaine series, which include See Also Murder, See Also Deception, and See Also Proof. Allison Lenser, a freshman, has read this trilogy and loves how diverse these books are compared to other mystery books of this era. “Each one was unique in its own way,” she said.

Lenser then went on to explain how other murder mysteries take place in modern-day cities, but the Marjorie series is set in the 1960’s on a farm. This one simple element that was altered caused these books to stand out when compared to other mystery books of this era.

A unique aspect of Sweazy’s is his rather distinct writing style. Most authors make an outline before writing and mull over details until they have created the perfect storyline. Sweazy chooses to instead immerse himself in writing and see where the story takes him. “I just kind of fly by the seat of my pants… So I kind of know what’s going to happen, but I don’t know everything. I don’t want to know everything,” he said.

Writing books isn’t the only activity that Sweazy focuses on. He is also a freelance indexer. Cheryl Lenser, a friend of Sweazy’s, also indexes books for a living. “In several of Larry’s novels, he references his other skill–indexing books. Larry has the organizational ability to keep the characters, events, and timeline in mind as he crafts his stories,” she said. Larry’s exquisite indexing skills help organize his writing so his storyline makes sense.

Aside from writing and indexing, Sweazy also reviews books for a magazine, he is on the board of directors for the Midwest Writers Workshop, and he teaches writing courses at the Indiana Writing Center. “Usually everything I do is related to writing, in one way or another… [but] I do quite a bit of other things other than write.”

Sweazy has plans in the future to write and publish more books, as well as add to his current series. He doesn’t plan on slowing down and aims to feed his craving to write for as long as he can.

“I’ve got some young adult ideas I’d like to do, or some science fiction, or some literary novels. It just depends on if I ever get to them,” he said.