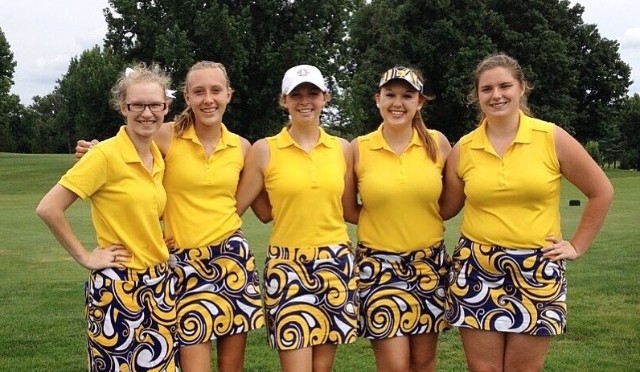 As the school year kicks off, so do the athletic teams, especially the women’s golf team. They recently placed second in the Hancock County Tournament, where they received their best score in four years of 179. At this same tournament, Makenzie Fisk, 12, earned a place on the all county team, a feat that is not easily done.

“My season right now is pretty strong. Since the season has started I have won an invitational and got third place at County. But the most important part is the team! My team is doing very well this season! We have all improved and I’m excited to see where the future takes us.” said Fisk, on how the season is going. Rose Gerard, 9, echoed this sentiment. It appears everyone is going strong this season.

The real power behind the players is the team, though.

“I don’t really think of my team as a team, I think of them as my golf family. I love going to practice and playing in matches with them. We all get along very well!” said Fisk.

“They get along really well. It’s a small team, so they all are very close. They like to sing songs all the time, every bus ride is a sing along” said Mr. Wiley, the coach, in good humor.

So the season if off to a great start so far.

“I certainly hope the rest of the season goes well, and I believe it will if we keep practicing the way we have.” said Gerard.

“I really think we are going to go far this year. I believe we have a chance to go far and we have already showed this when we got second at county (beating Mt. Vernon and Eastern). I know that we are capable of great things,”said Fisk.

Nothing but hope and determination from the women’s golf team, a sight to see both for the newest and oldest players.