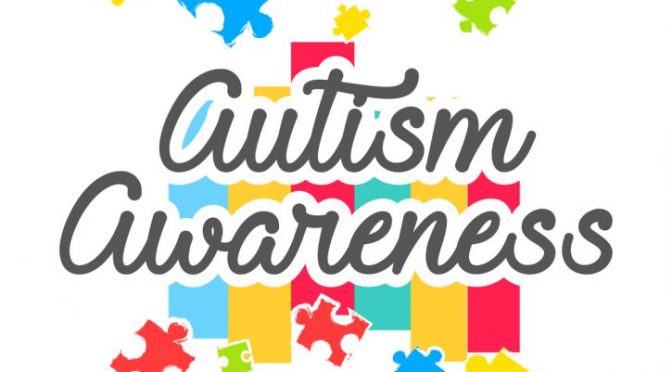 The start of April is the beginning of a transition period from bitter cold temperatures to warm, sunlight-filled days, but another important time also kicks off on the first of April: Autism Awareness Month.

Autism Awareness Month was created to further research about autism and educate people about the disorder. Webinars, learning sessions, and fundraisers are put on during the month of April so that the public can expand their knowledge on the subject and join the movement to educate more people about the effects of the disease.

So, what is autism anyway? According to autismspeaks.org, autism, or autism spectrum disorder (ASD), refers to a broad range of conditions characterized by challenges with social skills, repetitive behaviors, speech and nonverbal communication. What follows is a personal story about the experiences of someone with autism.

Contrary to popular belief, autism is not a mental illness. Maureen Jackson, a Greenfield resident, 75, has a now adult son named Paul who was diagnosed with autism at age 35. “[Autism] is a neurological disease. Most people think especially because he’s going to a psychiatrist and does take medication that it’s a mental illness and it’s not, it’s biological really, like diabetes.” she said.

Mental illness, as described by mayoclinic.com, refers to a wide range of mental health conditions, such as depression, anxiety, and eating disorders. A mental illness is a disorder that one acquires later in life, while autism is a biological syndrome that affects a person from birth.

Understanding autism and its effects on the brain is not a simple task. There are many different types of autism; some forms are severe while other forms are hardly noticeable. “Autism is not a one-size-fits-all,” said Kathleen Burke, a special education teacher at GC. “Autism is on a spectrum… students can need little to no support or they can need significant support. It depends on the person themselves.”

For those with severe cases of autism, understanding other people’s emotions and recognizing sarcasm does not come as easily to them as the standard person. One struggle in particular for children with autism is being able to learn in a traditional school environment.

Paul Jackson, 48, had a rough school experience due to his autism. “It was terrible. I got bullied a lot and the teachers did not understand my disability.” he said. Maureen, Paul’s mother, then explained how Paul’s teachers had the impression that he was a troublemaker. “Starting in first grade, the teachers would tell the kids to get their math books out, and he wouldn’t, and the teacher would finally realize that she had to distinguish and say ‘Class, get your math books out now. Paul, get your math book out now.’ It was like he didn’t feel like a part of the group.”

Because Paul appeared to be unengaged during class, his teachers would set up conferences to meet with his parents and the principal to correct his behavior, but because autism was virtually unknown at the time, no one knew why Paul couldn’t stay engaged in conversations and class discussions. Doctors couldn’t even connect Paul’s struggles in school to autism. Maureen said, “When Paul was in school, doctors didn’t even have a clue. Paul had one of the best-known pediatricians, certainly in the state of Indiana, and he just blew it off. He said the teacher didn’t know what she was talking about, that Paul’s quiet and he’s fine.”

Different setbacks for Paul came as he entered adulthood. Even though Paul scored extraordinarily high on the standardized tests, his inability to succeed in a classroom kept him from receiving a high school diploma. However, he overcame this hindrance and earned his General Educational Development (GED). Unfortunately, this wasn’t the only setback that he endured upon becoming an adult.

Job hunting proved to be an arduous ordeal because finding a job that suited Paul’s needs was difficult to come by. While he is much more intelligent than the average person, his lack of social skills due to his autism kept him from being getting any job higher than a position at a convenience store. Maureen said, “It’s frustrating, really frustrating, for him to be stuck in a job where he sweeps the floor and stocks the shelves, but he can’t put together and work with other people and take instructions because there is some misconnection.”

It is frustrating for people with autism to endure rejection simply because their minds work differently than most people’s minds. However, many autistic people have hidden capabilities because of the unique way their brains function. For example, some people with autism might be able to calculate math equations more swiftly than other people and they can have exceptional memories. Maureen marvels at Paul when he mentions a memory and can tell her the exact date the event took place. “He would say, ‘Do you remember when we went to Taco Bell on June the third of 1997, right after we went to the zoo? Remember that?’ and I would say no. I used to think he was making it up. I still can’t explain that, it’s weird that he would have that memory.” she said.

Because autism was an unknown disorder when Paul was a child, there wasn’t any resources available to him that would have made his school experience more enjoyable and successful. Now that autism and its effects have been researched, new resources have been discovered to help autistic students to understand the material and the emotions and feelings of the other students around them. “One method that tends to work for a lot of people is anything visual, so like visual schedules, organizational plans, planners, etc.” Burke said.

Another teaching method that works well for students with autism is having access to a quiet space, so going down to a break room or simply spending some alone time in the hallway could help soothe students that might feel overwhelmed, Burke said. Stress gets the better of everyone at some point, so having quiet areas in schools for students to calm down in is beneficial, she said.

It’s important to know that there isn’t anything wrong with people with autism; their brains are just wired differently than most people’s brains. Consider taking part in Autism Awareness Month by joining in on a seminar or webinar, donating to a fundraiser that furthers autism study, and spreading the word to others.