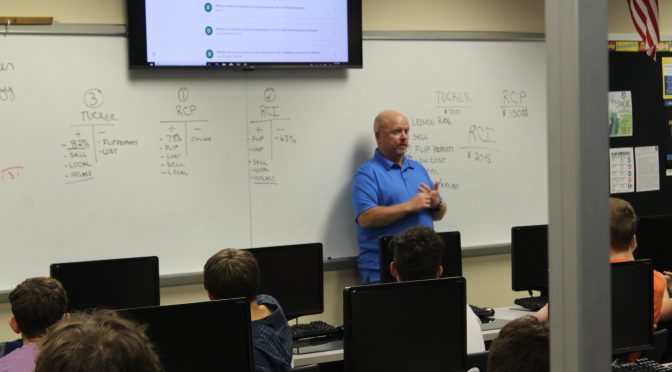 Mr. William Henderson is a business teacher, but that is not all. Henderson is also a veteran who served our country. Henderson started off his military career in the army by enlisting. Henderson said, “My father served during World War II and my brother also had just joined the army. In a way (I was) following my family’s footsteps, but I didn’t particularly leave myself any other option.”

His first days of service were almost like any other, but still different. The military put him on a bus, flew him to bootcamp, he got his uniform, and then he was right in the thick of it. It took a whole 16 weeks for the bootcamp to come to an end. Henderson said, “I had to learn my squad mates like the back of my hand.” He learned how to fire weapon systems, how to seek the enemy, and anything a reconnaissance job would do. The army staff handpicked all his training for his specific job,  everything that suited him best for reconnaissance, he said.

Henderson served in the first Gulf War in 1991. The first Gulf War was caused by Iraqi President Saddam Hussein’s longing for the oil reserves in Kuwait. Hussein attempted to justify it by saying that Kuwait initially belonged to Iraq. This is false as Kuwait was established before Iraq’s sovereignty. This caused an international uproar when Hussein started his siege with America being the loudest voice. The USA and allied forces gave Iraq a chance to stop, but they did not so the Gulf conflict ensued.

During his time in Iraq, the weather presented challenges. Iraq had up to 107 degree temperatures with the lowest being only 83 degrees. Henderson said, “I remember it feeling like the air was being sucked out of your lungs when you first arrived.”

Henderson ended his last day of service on September 3, 2011. Going back into civilian life was a difficult thing for him. Henderson said, “The army in a way institutionalized me.” All his basic needs were provided for: housing, food, water, clothes, ect. They were all already there. Henderson said, “It was hard for me, but I came out as a better person.”

Henderson’s teaching style was also affected by the military. Teaching was difficult at first because of how different it was from the military, he said. Henderson said, “In the military troops will follow orders when told by their superiors, but kids and teenagers tend to be more difficult in following directions.” It has made him have a more strict and also a more disciplinary teaching style, he said.

All in all, Henderson stresses how much he just wants students to learn. Henderson said, “I really want to be a teacher to them. I want them to go out of my class and take that lesson we learned, and then turn it into something even greater.”