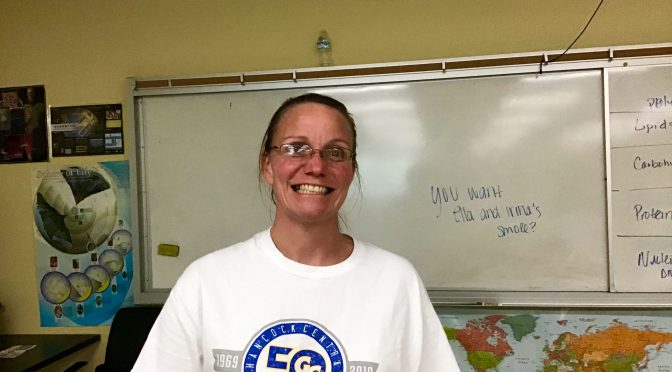 It’s hard to put into words who the teacher Rebecca Fields is. She is creative, funny and a good person to be around. Being her student means having to get used to completing crazy assignments and projects, such as learning about tectonic plates experimenting on food.

Born in Allen Park, Michigan, Ms. Fields moved to Warsaw, IN while she was still very young. Rebecca has four brothers and one sister – they were called The Fieldses. At the age of 13, playing with her brother she tried to cut off a branch – to hit him with it – using a box cutting knife, she accidentally stabbed herself in the knee. Later, at her senior camp at Warsaw High School, a freshman from her swim team tried to make a ‘joke’ and to ‘scare’ them by shooting up into the air. The boy apparently didn’t realize that eventually the bullets would go down. Out of all the people there,  the only one who got hit was her. Later in life she got stabbed – again – on her hand, as a defensive wound. You might think, how crazy is this, right? Although going through these unpleasant situations. Ms. Fields handles them with optimism. “The days are hell, but the year will be good. I can either let this ruin every single day of the rest of my life or I can work through this, and recognize that these days while I am working with this will be hell, but I have to because I am choosing not to make my whole life hell,” Fields said of her experiences. She added, “True growth happens when you have no idea what’s going on.”

She mentioned Dr. Jackson and Dr. Whitaker, who taught her ecology and zoology/biology at  IUPUI. She described them as fascinating people who made her love what they were teaching. “The classes I remember the most are the classes where I do things,” she said referring to their IUPUI classes.

She has been teaching at Greenfield-Central for 12 years now. The reason why Ms. Fields became a teacher is because she is good with people and has always been, she said, and that is why she may be considered a memorable teacher. One of the things she loves the most is her coworkers at the science department, whom she describes as knowledgeable and understanding friends who can always bring something different to her life.

Once her four kids become stable adults she plans on moving and going to new places. She wants to meet the Lord of The Ring’s world, New Zealand, travel with the All Blacks “the best rugby team ever,” she noted; experience a shark cage, see the Game of Thrones landscapes and the list goes on. Until then she still has many years left in her educational career.

Creative is a great word to describe Rebecca Fields. You can see that in her classes, where she encourages her students to apply the things learned in class on projects you would never even think about doing. The best evidence of that is the way she sees life as an uncarved block. “You get a piece of marble, inside of that is one of the greatest sculptures ever. You just have to find it,” Fields said.