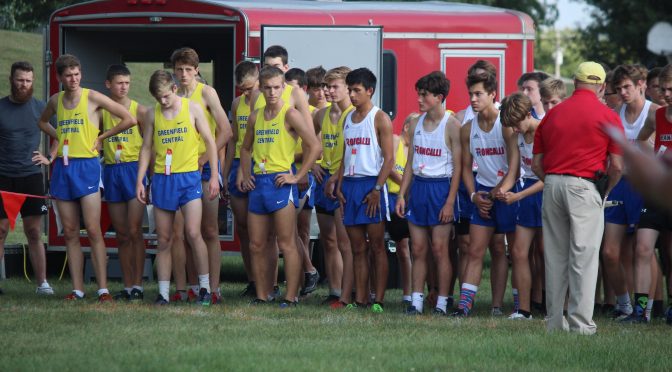 The boys cross country team finished well, one spot away from qualifying for regionals. Four of the boys qualified individually for regionals. Connor Kinnaman, 12, qualified to run at semi-state. Matt Wickham, 10, Tyler Osborn, 11, and Jonah Fletcher, 11, were the other individual qualifiers for regional.

Kinnaman, one of the team’s strongest runners, said he wants to encourage his team to do their best and achieve their goals. Kinnaman, 12, said, “We’ve been through some tough circumstances this year so I want the team to be successful in these upcoming races in order to prove to them that they can always work through hardship to achieve their end goals.”

Kinnaman has learned a lot from being on the team since his freshman year, he said. He has learned about time management and self-discipline. Kinnaman said, “(Coach Smith) entrusted me with a captain’s title my sophomore year and has continued to allow me to lead the team ever since. Through this position, and with the skills Coach taught me early in my high school career, I’ve been able to help the other runners with their troubles: academic, athletic, and personal.”

Seth Young, also grade 12, said his goal to to have fun, and he wants to leave a mark on the team after his senior year. He wants to make sure everyone had someone to talk to if they didn’t feel a part of the team. Young has learned to never give in. Young said, “The most important thing I have learned about in being in cross country is to never give up no matter what the challenge is, and you are tougher mentally and physically pushing yourself than you think you are.”

Micah Smith, 12, has shown determination this season. He almost always puts in the work that is needed, shows up at conditioning, and is there at every practice and meet, he said. Smith said, “You’re out there alone running three miles as hard as you can. Coach can’t run with you and yell at you to go faster. You have to make that effort. You have to commit yourself to the sport. We work every day, every week, every year.”

Smith has also learned patience is key when you are faced with injuries. He stated, “Running is one of the most physically demanding sports there is. A sharp pain in the knee could quickly have you in the surgery room.”

One of the team’s biggest competitors this season for the team was Mount Vernon. The boys have beaten them already a couple of times so far. This season, the boys were looking forward to being able to go to semi-state, and hopefully state.

Through all of the challenges, goals, and work of a season, Kinnaman talked about how cross country had been like a family to him over the years; they would come together at the end of the day as a family. Kinnaman said, “One of the most interesting things about XC runners is that we bond through almost everything we do. Running miles after miles, enduring pain, and spending countless hours listening to music, stretching, lifting, and playing games outside of school all contribute to our bond as a team and as friends.”

Kinnaman continued, “One of the things that is very apparent in our team, that I’m quite proud of, is that we function a lot like a family. We argue, banter, and sometimes fight, but we simultaneously stand up for each other and protect one another from the “dangers of high school.’ ”