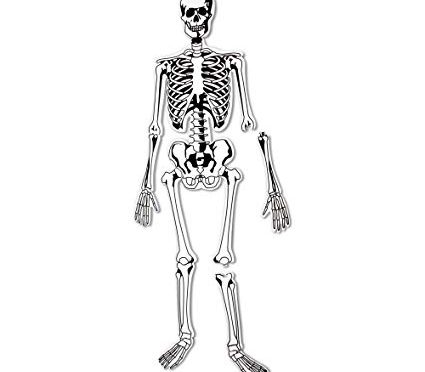 The clock strikes twelve. It’s officially October 31st. It’s officially Halloween. Right at this moment, in the local cemetery, the skeletons from below the ground come back alive. They are able to be free again. However, only until the sun rises. As soon as the sun touches the sky, they will go back to being stuck in their coffin again. At least until next Halloween.
The first skeleton to ascend from below the grave was called Malleus. Next came his friends; Scaphoid, Incus, Patella, and Sternum. Next thing you know, there are hundreds of skeletons rising from below their grave. Each one excited for their taste of freedom, albeit small. Even with all of the excitement, the lingering reminder of how long their freedom lasts is still there.
The first thing Malleus does is reunites with his old pals. Malleus spots Patella first. Patella is a relatively new skeleton, with this being only her second Halloween. They both meet up to find the others. They don’t have to look for a long time when they spot the others with each other. Incus, Scaphoid, and Sternum come up to greet Malleus and Patella.
All of the skeletons exchanged their greetings, then began to talk about their Halloween plans. They had approximately five hours until the sun rises. That’s five hours of freedom. The first thing they’ve decided they were going to do was walk the streets. They wanted to see what’s changed in the year they’ve been stuck in that dark, lonely coffin.
Two hours pass until they decide they have done enough exploring. They weren’t sure what to do next. There’s not many things the dead can do while the undead are resting. Incus suggest they meet up with their other skeleton buddies. Since they have nothing better to do, they decide to go meet up with their long time no see buddies. All of the five skeletons walk back to the graveyard. It only took a few minutes until they found their other friends, Fibula and Tibia. Fibula and Tibia are known as elder skeletons. They are best friends and this is their fiftieth Halloween.
They spend the next hour catching up with Fibula and Tibia. The five skeletons decided to go visit their families. The skeletons decided to split up and meet each other back at the graveyard. Malleus’s family was about four blocks away. He misses his family so much. Every single day, in that lonely coffin, he thinks about them. Even though he no longer has a brain or a heart, he still cares for them deeply.
When he arrives at his house, he goes up to the front door. He remembers that there is a key under the sunflower pot. He reaches for it and opens the door. He makes sure to stay silent, so he doesn’t wake anyone up. His first destination is his old dog’s bed. He misses his little buddy. Once he sees his buddy sleeping peacefully, he heads upstairs.
His next destination is his daughter’s room. She would be seven now. He misses his daughter so much. He was so devastated when he realized his daughter would grow up without her father. The last room he decided to visit was his wife’s. He misses his wife the most. They were married for fifteen years before he died in a car accident. Once he takes his last look at his wife, he leaves his home once again.
Malleus makes his way back to the cemetery. He meets up with his skeleton buddies. They have one hour left before the sun rises. Every skeleton spends the last hour dancing to music and laughing with their friends. Once Malleus meets up with Patella, Incus, Scaphoid, and Sternum, they all head to the middle of the cemetery. As soon as they arrive, they already hear the music. They also hear the laughter emitting from the other skeletons. They all look at each, and ran to join the fun. All five of the skeletons danced along with everybody else in the cemetery. They all laughed, and enjoyed their time together. They danced until time ran out. As soon as the sun touched the sky, the cemetery became silent. All of the skeletons returned back to their designated coffin. They will stay trapped once again until the next Halloween.