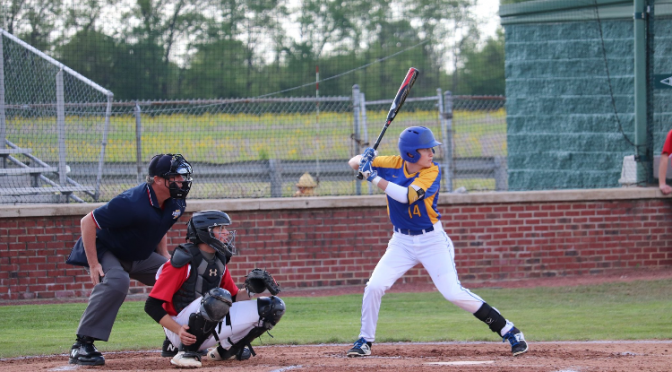 Photo: Carson Gibson, 11, is up at bat against Southport in a game from last season.

Greenfield-Central boasts several promising young athletes, and on that list, you will surely find Carson Gibson. Gibson, 11, is the shortstop for the varsity baseball team and is also a member of the varsity tennis team.

Gibson has had high expectations put on him as an athlete since day one of high school, as he played varsity baseball as a freshman. When asked about the experience, he admitted that he could feel the pressure. “When coach first had me in the starting lineup I was very nervous, but excited at the same time. Throughout my first couple games I struggled offensively but as time went on it became less of a challenge and I began to play in ways that I knew I was capable.” When Gibson put it all together, he became one of the best players in the conference, being named to the All-Hoosier Heritage Conference baseball team as a sophomore.

The GC baseball team performed at a high level this past season, winning the conference outright, but were eliminated in the regional finals by Avon. This year, Gibson believes the Cougars could take it up a notch. “This year I believe we could do something very special. With many returning starters and a deeper pitching staff I think we could shock many people and make a huge name for ourselves in the state tournament, we’ve put in lots of hard work and I think we have a very strong team.” Gibson’s play will be a huge factor towards how the Cougars fare this season, and he says his goal is to help his team in any way to make sure they make a deep run.

Gibson’s teammates gave positive feedback about the shortstop, which was not surprising. Lance McKee, 11, said, “Carson is a good teammate and a guy who is going to push you to be the best you can be. His work ethic is impressive.”

Jaden McGee, 10, had similar thoughts, “Carson is a great teammate and someone you want on your roster. He works hard for everything he has and deserves the success he’s had. He helped lead us to a sectional and conference title, and will lead us to much more soon.”
Along with baseball, Carson is also a member of the boys tennis team. After playing in junior high, Gibson decided to return to the sport as a junior.

He talked about how he felt about season. “I really enjoyed playing tennis this year, and am satisfied with how I performed considering I hadn’t played since 7th grade. Despite getting knocked out in the second round of sectionals, I feel like this year was a huge step for me and the team going into next season.” Gibson ended up as one of the key pieces for the squad this past year.

Balancing school and sports can be difficult, but Gibson has had no problem doing so, and his 3.7 GPA confirms that. “Balancing school and sports can be very tough, but staying ahead in the classroom is what is most important. I always make sure that I’m done with my schoolwork before anything else.” Gibson has shown time and time again that he is much more than just an athlete.

With less than half of his high school experience remaining, Gibson is working hard to collect many more accolades and be the best student athlete he can be. Cougars fans should be excited and grateful to have a talent like Gibson.