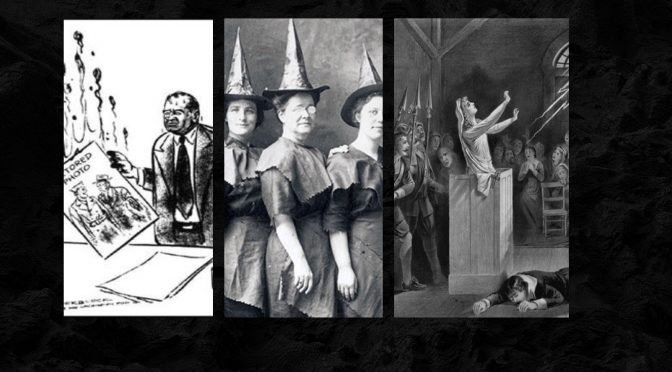 Summary: An interpretation of how witch hunt became a common term and the story behind it.

The dictionary characterizes the term as:

“An attempt to find and punish a particular person or group who are being blamed for something, often simply because of their opinions and not because they have actually done anything wrong.”

Although now the term “witch hunt” is a common term, the story behind it is not common at all. The persecution of witches goes back to its peak, during the 16th century in Europe and 17th also in America. They all began with a little rumor or suspicion of a certain witchcraft habit; soon paranoia would spread and anyone slightly out of line could be accused. The most famous witch hunt persecution is the Salem Witch Trials, when 20 people were executed due to accusations of witchcraft.

Considering that most victims were women, you could easily relate that the term witch hunt at that time was especially related to sexism.  Women in Europe and America could be accused of preventing conception, rendering men powerless, seducing men, giving birth to demons or basically anything where they would stand out.

Ever since humankind made important scientific discoveries and learned that certain seemingly unexplainable things aren’t witchcraft, the term “witch hunt” has been used for other situations, such as any kind of constant accusations over – usually- unreal things. You can notice this all along through history, for instance, at Hitler’s condemnation against his enemies or Senator Joseph McCarthy during the Cold War with a non-stop chase after communists.

Ever since, the term has been used with much more frequency, especially when it comes to politics. Above all, this is not about either Republicans or Democrats; both parties will always try to hurt each other’s reputation. That seems to be what politics is and has always been about. As a result of this, the term – implying an unfair persecution – sometimes can be used wrongly, just as any other words, when used too many times, loses its meaning.

For the last couple years, people in the media or with the media’s ear have been stating often that especially powerful men are the target of a modern witch hunt. It has been related to the current president, other prominent politicians, and the Me Too movement when women in Hollywood stood up and accused directors, fellow actors, and others of sexual assault. The problem isn’t about the accusations themselves, but the fact the fact that the media may portray  powerful white men as the victims, while in the past most people who were accused in witch hunts were those without power and women.

It’s important to understand how terms change as time passes by. One must realize how much these words weigh; the past witch hunts had a big impact in our history and one must understand that the term “witch hunt” should be used properly and in a respectful way.