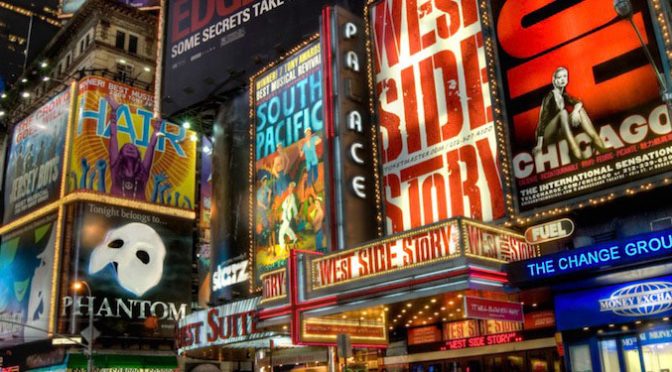 Theatre has shaped cultures and impacted the lives of millions around the globe. Many memories are made at the theatre, whether one is performing in a production or simply attending as an audience member. And for those who wish to perform with or experience the best of the best, there’s most likely no better stage than Broadway.

The first Broadway theatre was built in 1750 by Thomas Kean and Walter Murray. The theatre seated almost 300 people and performed a variety of opera and Shakespearean shows. Productions were halted during the Revolutionary War, but shows continued soon after with the building of an expansive theatre called Park Theatre.

More theatres sprang up in the area in the 1800s, including the Bowery Theatre, Niblo’s Garden, and the Astor Place Theatre. Productions expanded to include operas, musicals, plays, variety shows, and vaudeville shows. However, the modern musical that is often seen on Broadway today wasn’t introduced until 1866.

The first musical to include original choreography and songs was a show called The Black Crook. The show was nearly six hours long and ran for an astounding 474 performances.

At the beginning of the 20th century, a staple of modern Broadway theatres was introduced: an electric marquee with bright white bulbs to advertise a show. The first show to be displayed on one of these electric signs was a show called The Red Mill, which was a musical based on the current time period.

Broadway theatre’s popularity died down with the introduction of motion pictures with sound, but it rebounded in popularity after the Great Depression. This period brought to life classics that have been revived and are still being performed today, such as Fiddler on the Roof, West Side Story, and My Fair Lady.

Modern Broadway shows consist mostly of musicals, though traditional plays can also be seen. The longest running Broadway show was previously Les Miserables, with a total of 6,691 performances. The musical Cats took the lead when its run ended with 7,485 performances. But the show that really takes the cake is Phantom of the Opera. The show has been performed over 12,000 times and is still on Broadway to this day.

Broadway has made itself a legacy that will last decades into the future. The coming generations will have the opportunity to experience jaw-dropping, awe-inspiring moments that are unique to the Broadway stage and will most likely never be forgotten by theatre fans everywhere.