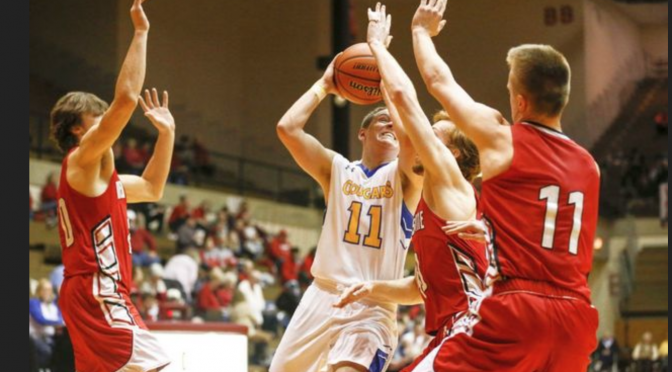 Photo Caption: Brady Mundell, 12, battles for a shot at the 2018 sectional at Richmond. (Photo from Greenfield Reporter).

With the arrival of new boys basketball head coach Luke Meredith, optimism around the direction of the program is high. One of the key pieces in determining the success of Meredith’s first season will be the play of one of his top seniors, Brady Mundell.

Mundell has quite a few personal goals for this upcoming season, but one he’s focusing on in particular is to shoot better from the field. “I think everyone has personal goals, and if you don’t then you are doing yourself a disservice,” he said. “I think a big one for me this year is to shoot a higher percentage from the field. I have improved every year and look to do the same this year.” A bump in Mundell’s shooting would certainly be big for this Cougars team, and he has put in the work this offseason to hopefully achieve just that.

Looking at his expectations for the team as a whole, Mundell said the main goal was to simply be better than they were last year. Mundell said, “I think this team is capable of scaring some people. We want to do our best in making sure that we’re a tough W at anytime for any team.” There is little doubt from anyone around the program that the Cougars have put in the work to help try and accomplish that goal. Mundell acknowledged this when he said, “I personally was in the gym as much as possible this summer, getting shots up, and then also summer workouts with the team. We’ve put in the work.” He along with the rest of the Cougars are hopeful that this time spent in the gym will translate to wins in the season.

Another positive for the Cougars program going into this season and beyond is how highly thought of first year Greenfield-Central boys basketball head coach Luke Meredith is. Mundell said this about Meredith, “I really like Coach Meredith and the energy he brings to GC basketball. He’s invested in us and the team rallies around him and tries to bring the same juice he brings every single day.” Not only does Meredith motivate his players on the court, he does the same in the classroom. Mundell backed that up, saying, “Coach Meredith has set a standard for GC basketball players. His motto is books before ball. He’s let me stay after school and get help in classes, even if it meant missing practice occasionally. I appreciate that he cares for me not only on the court, but in the classroom as well.” Based on Mundell’s comments, and others around the program, one can only assume that the future is bright with Meredith at the helm.

Others speaking about Mundell makes you realize his importance to this Cougars team. Gavin Robertson, 10, said, “Brady is a good teammate that isn’t afraid to say what he thinks. He’s a great leader and always gets on everyone to make sure they’re playing to the best of their ability.” Mundell’s teammate and brother, Caleb, said, “Brady is a great teammate, and vocal leader. He’s always making jokes, and is just fun to be around.” Hearing his teammates, and others around the program share their thoughts on Mundell, you realize how important a piece to the puzzle he is.

Being a senior, Mundell said he has seen a lot. Now on his third coach, he thinks his leadership and experience can help the young guys tremendously. He understands his time as a Cougar is coming to an end, and is thankful for being able to put on a Greenfield-Central jersey. He wants to make sure his final season is his best yet, and along with the rest of the Cougars team asks that you come out and support this season, and with the work they’ve put in this offseason, they deserve it.