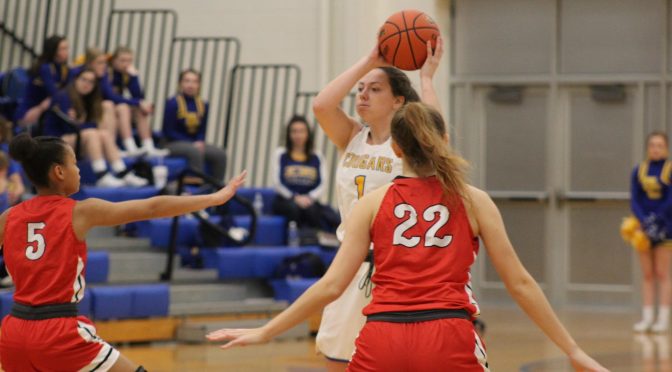 Photo Caption: Hannah Farrell, 12, looks for an open teammate during the Richmond game this season.

The girls varsity basketball team is  feeling positively about their season this winter. The girls have defeated Greenwood  and Richmond so far.

Caroline Gibson, 11, said, “I am very excited for this season, not only for me, but also for the team. I enjoy being around all my teammates and it’s just a fun group; I think we can accomplish a lot.”

Zoe Solis, also grade 11, said, “I’m always excited for the start of the season. All of the work in the offseason finally starts to pay off once the season starts. It’s awesome to get out there and see what your team can do.”

Gibson said her goal this season is to win sectionals. She said that has always been her goal for their team.

Addison Hill, 11, wants her team to win all of the games this year and sectionals. Hill said, “A few goals we would like to accomplish this season is having a winning season and winning sectionals.”

Solis wants to always be there for her team. Solis said, “One goal I personally want to accomplish this season is honestly just helping my team any way I can. On the court or off the court, I want my teammates to know I have their backs at all times.”

Gibson, Solis, and Hill all have the same competitor they want to beat this season: New Palestine. Hill said, “One of our biggest games this year is definitely going to be New Pal and if we play all out as a team, it’s a winnable game.” Gibson said all the games are going to be competitive, but she looks forward to playing New Pal the most.

Solis says that you can manage your school work and sports at the same time if you work hard. Solis said, “It can be tricky to organize your time responsibility so that you get your work done, but if you work hard in the classroom just like you do on the court, everything will be fine.”

The girls varsity basketball team has already started to bond very well this season, even with new girls joining the team. Hill said, “Our team this year is really close. A lot of us have been playing together for a while, and we get along so well. We’ve had a good group of freshmen come in too.”

One of the biggest things the girls have already learned from basketball this season is having to work hard. Gibson stated, “I learn many things from basketball and from (Coach Key) but the most reinforced lesson I will always keep with me is that winning is hard, and you have to work hard on something if you really want it.”

Solis stated, “One thing I will learn from playing basketball is that hard work prevails. High school sports teaches you a lot about the real world. The work you put in reflects on the type of person you are.”

Solis continued, “Basketball teaches me everyday that if you’re dedicated and you work hard, good things will happen.”