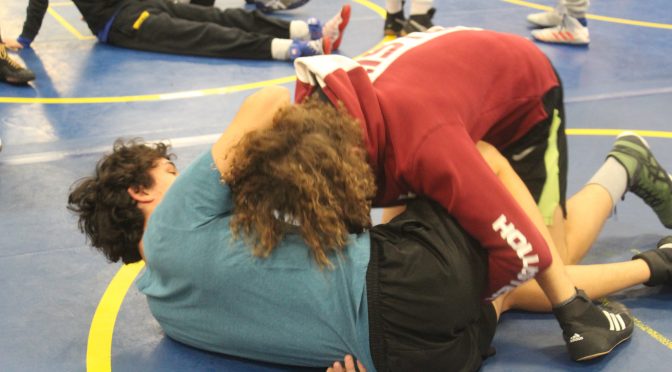 Photo Caption: Sly Blevens, 9, tries to get a hold on Braden Smith, 10, at wrestling practice.

The wrestling season can be an exciting time for everyone involved. The connections made between each team member show a mutual understanding of wrestling as a whole.  A few Cougar wrestlers expressed their thoughts on their preparation and goals for this sport.

Wrestling can be a bonding experience, but how it came into each student’s lives is all different. Matt Torres, 11, began wrestling at a young age because his older brothers did as well. Cooper Noehre, 12, was in a similar family situation. Growing up in homes where this sport was encouraged later influenced these boys into working harder to meet their goals of success rather than just wrestling for fun.

The Cougar’s wrestling coaches are head coach Josh Holden as well as coaches David Thaxton, Austin Early, Ed Hamant, and Mike Stanley. These men have been around for the athletes their entire journey. “I have learned so much from the coaches just within the last year,” Livia Quigley, 10, stated. “Coach Holden has inspired me the most always pushing me to work harder, he sets goals for me.”

Noehre’s take on the coaches was that they are a “tremendous help to improve my wrestling all the time.” Along with Quigley, Torres talked about his life being completely different if it wasn’t for the guidance of the coaches. “Throughout practice they’re right along with us.” This not only shows the character of these helpers, but the care they take with their young charges.

Training for the season is a year-round task that each member must do in order to be prepared for the actual season. Quigley likes to take her off-season training to cardio while Noehre practices with club wrestlers. Depending on their strengths and weaknesses, they usually know what they need to work on most. “I train hard all the time,” added Torres.

Right alongside training is maintaining the right diet in order to reach the correct weight class in a healthful way. Some of the wrestlers have a natural diet which makes it easier for them to stay in shape, wrestlers such as Noehre. “I know what is healthy and what I should eat. Even when I’m cutting weight, I still eat three meals, just smaller portions,” Noehre said.

Quigley has a similar situation in that she always has to watch what she eats even without wrestling in the picture. Torres laughed while saying, “Eggs have a lot of protein. They’re light and they fill you up!”

The wrestlers talked about life after high school. “I love being in the fight,” Torres began. “I’ll hopefully coach after high school.” Noehre is attending Purdue University next year and plans to wrestle for the next four to five years. Quigley hopes to make it big one day and become a professional. With such big dreams, it is apparent that they have the passion.