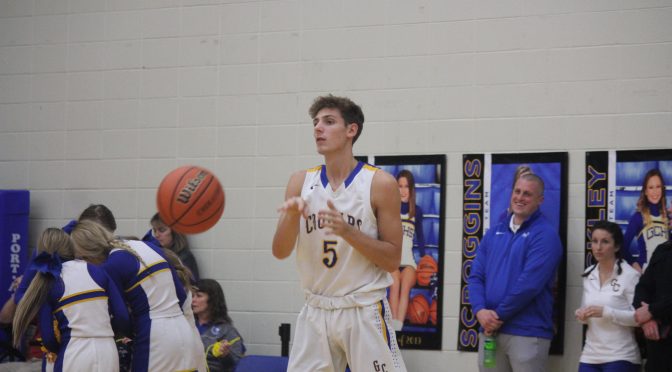 Photo Caption: Brock Wheeler, 12, passes the ball to a teammate in a game last season.

Cougar basketball is starting the season in full throttle. The freshmen team took home a hard earned first win against Knightstown. Owen Anderson and Bryce Hasty, both 9, had 11 steals combined in the 41-31 win. The junior varsity won on Dec. 9 against Indian Creek with Joey Roland, 10, leading with 16 points and Tyler Kerkhof, 9, with 10. Varsity got a win against Speedway on Dec. 14. Team members discussed their thoughts on the beginning of the season.

Tyler Kerkhof, 9, plays on the junior varsity team. Kerkhof talked about what he is looking forward to most this season. He said, “I am looking forward to building a family and winning some games this year, and I’m just really excited for it.” Kerkhof plays point guard and shooting guard. Some encouraging words from Kerkhof are, “We need to keep our heads held high and just know we got this because I think we all know we are a good team.” Kerkhof also believes that teamwork is an important key to basketball. He said, “Teamwork to me is everything. You have to have good chemistry and teamwork to be successful.”

Joey Roland, 10, plays for varsity and junior varsity. Roland said, “Playing varsity and jv can be difficult because of my age and inexperience on the court. To be successful takes a lot of time and effort.” A goal of Roland is, “I want to be able to play at a high level and get me and the team better and better every day so that the team can be successful and so we can make history.” Roland is looking forward to playing a fun sport with friends and trying to win basketball games.

Bryce Hasty, also 9, said, “I am hoping to win almost every freshman game.” Hasty wants his teammates, including himself, to try and help the situation and to keep their heads in the games coming ahead. “I feel like it is my responsibility to hype them up,” said Hasty. Hasty plays shooting guard. Some encouraging words from Hasty are, “Try and keep their head in a game. I tell them that it’s good and to keep doing what they are doing.”

Varsity has a little bit of a change to their coaching, getting new head coach Luke Meredith. The former assistant coach at Avon High School has been coaching for over a decade and beat out 40 other applicants for this job. Having a history of making things turn towards the right direction, he will hopefully turn us around into a winning team. Meredith said he knows the team has a ton of potential and is ready to start building a winning program. Meredith teaches English Language Arts in addition to coaching the boys varsity basketball team.

Coach Meredith talked about what it’s like coaching the varsity team. Meredith said, “It is a unique opportunity, it’s a challenge, and I’m very blessed and appreciative to have the opportunity to be here at Greenfield Central.”

Meredith also discussed the preparation and time he has put in towards coaching. He said, “Effort is the equalizer. Although this is my first year coaching as the head coach, I do feel like I put in a ton of time to be able to be prepared. I’m willing to put in that time, and I’m willing to sacrifice and do the things needed in order for our program and our kids to be successful. Without that experience, I feel like I can turn that into a strength by working harder”

A phrase that Coach Meredith uses to encourage his team is, “Piece by piece, block by block, brick by brick.” Meredith continued with what he considers a good season. He said, “A good season is not winning 8, 10, 12 games, a good season is ‘Did we mold these young men?’ ‘Are they getting it done in the classroom?’ ‘Are we getting better?’ That, for me, would define a good season.”