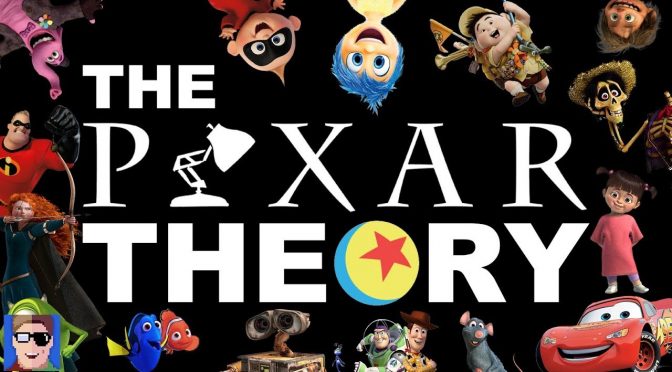 Have you ever noticed the Easter eggs and hidden references Pixar hides in their films? Perhaps you’ve spotted the iconic Pizza Planet truck driving down the street in Finding Nemo or the Luxo Ball from the Pixar short “Luxo Jr.” making an appearance in Boo’s room in Monsters Inc. This may seem like a harmless Easter egg hunt the Pixar animators like to play with viewers, but it could mean much more than that. These Easter eggs are the origin for the most well-known conspiracy theory in animation: the Pixar Theory.

The Pixar Theory is a popular fan theory that suggests that all of the Pixar movies exist in the same universe and on the same timeline. It explains how the animals in the Pixar universe gained-human like qualities and explores the conflicts between the three most prominent groups in the movies: humans, animals, and machines.

It all starts with Brave, during the Dark ages in Scotland. In the film, the witch uses magic sourced from the mysterious “will-o-the-wisps” to turn Merida’s mother into a bear. However, the magic does not turn her completely into a bear; she still retains some human qualities, such as the ability to cut food and open doors. At the end of the film, Merida’s mother in turned back into a woman, but it’s possible that the magic affected other animals and caused them to evolve and gain human-like qualities.

Fast forward to more modern times and certain animals now have the ability to speak and perform tasks formerly done solely by humans. Remy from Ratatouille, the fish in Finding Nemo, and the dogs from Up are among some of the animals that have developed speech. Remy has even developed cooking skills, something only humans could do for a long time. At this point, only a small portion of humans have been introduced to the animals’ intelligence, but once the news gets out, conflicts will arise.

Around this same time, machines are starting to gain intelligence along with the animals. In The Incredibles, the A.I. Bot “started to wonder why it had to take orders.” This piece of artificial intelligence is destroyed, but others like it begin to acquire more and more knowledge. Now that both animals and machines are gaining intelligence, humans are facing immense danger.

With the animals annihilated and the humans on a utopian ship, the machines take over the world. Cars, like the ones portrayed in the movie Cars, rise to power. Since humans are no longer living on Earth, it seems that the machines would not be able to thrive, but because the memory of humans still live on, the machines are able to function without the physical presence of humans. Human cities and objects still litter the Earth, so for the time being, the cars and other machines can live on.

As the years pass, the globe slowly succumbs to an inevitable fate. Because the world is run by machines, the amount of carbon emissions and ruined landscape leads to pollution beyond repair. With the pollution also comes an abundance of trash and a lack of human memorabilia that the machines can live off of. The machines eventually die out and the world is left in the state of ruin we see in WALL-E.

The events of WALL-E play out and the humans return to Earth. Artificial intelligence finally meets its demise as the humans learn how to be independent once again. In another turn of events, a small colony of bugs emerges. It’s believed that these intelligent insects were insignificant enough that they managed to survive on the Earth. Once the Earth is restored to its former beauty, the bugs multiply and become the ants, grasshoppers, and other insects seen in A Bug’s Life.

Soon after, however, the humans and the animals disappear. It’s unclear why and how the humans and remaining animals disappeared, but monsters take over the world and create human-like societies with housing, education, and jobs. One of the most important jobs, as portrayed in the film Monsters Inc, is being a scarer. Scarers go through doors and scare children to collect screams, which can be turned into energy. The movie implies that humans are simply in a separate part of the world and are not aware of the monsters’ secret society, but this is not the case. Instead of traveling to a different part of the world, the monsters are actually traveling back in time to a time when humans still existed.

So how does this come full circle? The answer lies within Boo, the little girl that Sully falls in love with in Monsters Inc. When Sully is forced to say goodbye to Boo, she becomes sad that she can never see her big blue friend anymore. From that point forward, it becomes her life’s ambition to find Sully again.

Boo eventually finds a way to recreate a time traveling door like the one Sully used to find her. She travels to every time period imaginable and will sometimes leave artifacts from the future in the past, such as leaving a Luxo Ball in the Stone Ages. Eventually Boo settles in Scotland during the 10th century and becomes a witch. Boo grows up to be the witch from Brave that started the whole ordeal.

While this theory was only published to change one’s perspective of the Pixar movies, many people are divided on whether Pixar producers planned the movies to fit cohesively together or if it was a mere coincidence. Jonathon Hudson, a Radio/TV Teacher, said, “Personally, I think it’s a coincidence and they ran with it. The way that Pixar always operates, on the surface all their films appear to be very simple, but when you dive into each individual film, you find a lot of themes that are very complex. There’s always this social aspect, there’s something driving these characters, there’s some kind of motivation for why the characters do what they do.”

Other fans believe that the hidden references mean nothing more than what they are at the surface. Brooklin Bittinger, 10, said, “I think that Pixar purposely puts cameos and Easter eggs in their films, but I also think that a lot of theories, like this one, are made up by their fans to give the audience an alternate perspective.”

Another question to ponder is now that Pixar has been made aware of this theory, do they attempt to continue the theory or destroy it with their new releases? Hudson said, “I think they realized a long time ago that this thing could happen and planned their releases accordingly, but I don’t think from the start they had this planned. There’s always a deeper meaning, though, so we really don’t know.”

Ally Hughey, 10, said, “I think that Pixar didn’t originally have any way to tie together all of their movies in something this complex, but maybe they will intentionally make movies in the future that fit in with the theory. At the beginning they may have decided to add in things to each movie like the Pixar ball because they were cool, but know the references have a different meaning because of the theory.”

Whether the theory is true or just a bunch of random connections strung together will probably never be answered, but as long as Pixar and their fans keep thinking creatively, they’ll be plenty more movies and theories to come.