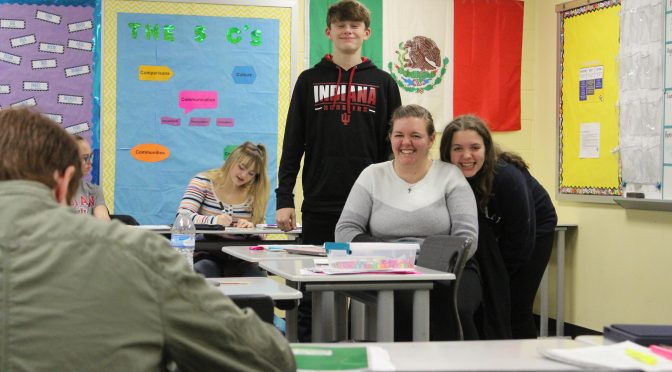 Grimes has been teaching Spanish I and II for a few years at the high school now. Before she was a teacher, she student taught for Mrs. Paula Perry, the head of the Spanish department. Ms. Sonja Jaggers, another Spanish teacher, said, “It’s nice to have a young teacher beside me. We throw ideas off of each other sometimes and it helps the both of us with lessons to teach our classes. She also helps me out with technology a lot when I need it, which is nice too.”

When she was little, Grimes would often play outside with her friends. When she got a little older, she picked up the skill to play piano and started to take lessons, she said. She also has an older brother; he is three and a half years older.  Grimes thinks her parents influenced her and made her a better person, having them always tell her what to do so she wasn’t ever lost. Growing up, Grimes always wanted to be a teacher. It was either math or Spanish, she said, but as time went on math got very difficult. Once she decided on that, Grimes started to actually study and pay attention in class. She thinks she did well, or at least she hopes so, she said.

One of Grimes’s favorite things to do is bond with her students. There is nothing better than getting to know them, it makes it easier to have a class with them, and also makes it easier to teach them, she said. She is proud of all of them, no matter how rambunctious they may be. Addie Coombs, 9, said “I like Miss Grimes because she’s closer to our generation rather than someone older because she understands how our brains work and sympathize with us a bit more rather than an older teacher. She’s a great Spanish teacher, she doesn’t get in student’s faces about learning quickly or pronouncing words correctly all the time. She lets us learn at our own pace and kindly guides us through the mistakes we might make.”

Grimes thinks all of the schooling was worth it; she gets to do what she loves almost every day and make lots of friends out of it as well. Jaggers said, “Grimes is very young, open, and honest. I’ve learned a lot from her just from the few years she has been teaching at the school.” Many students often go to Grimes’s room on their lunches, EB’s and in between passing periods often times to just say hello. She is almost like another student in a way, just by the way other kids talk and laugh with her.

Grimes’s teaching career is still fresh, and she hopes there are many more years. She loves meeting new students and helping them learn another language, she said. Coombs said, “She is really good at making sure you get your work done or that we make sure we understand the material that she would give us. Grimes would make sure to check in every once in a while to show that we are okay and not too stressed out, as a good teacher should.”