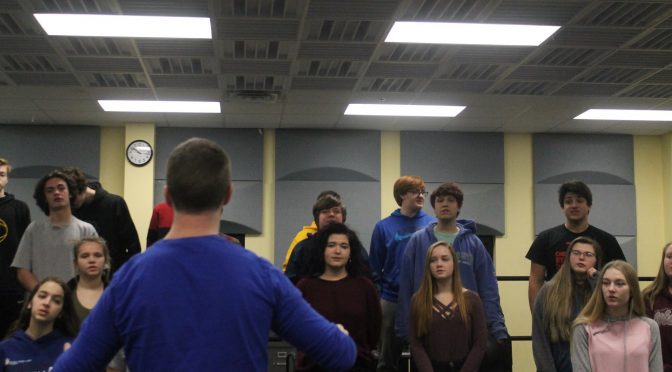 Choir director Paul Grizzard’s favorite dad joke is a new one. He hasn’t told it on stage yet: “A local man is addicted to drinking brake fluid. He says he can stop any time,” said Grizzard, who is known for dad jokes.

Isaac Kottlowski, 12, who is in the madrigal choir, said, “My favorite dad joke that Mr. Grizzard has told is ‘What do you call a fish with no eyes? A fsh!’”

Grizzard has been teaching at GC for four years. Prior to coming to Greenfield, he taught high school for ten years in Rushville. He has an identical twin brother named Mark, who lives in Illinois. Grizzard and Mark didn’t find out that they were identical twins until they were both 30 years old.

Grizzard started being a choir director when he was in high school. He really likes music and feels like that’s where his talent is. But when Grizzard was in college, he didn’t go into education. He got a Bachelor’s degree in music and math at Augustana College at Rock Island, IL. After college he went back to school at Ball State and got his teaching certificate. Grizzard taught in Boston, Massachusetts for a few years while he was getting licensed and he then taught at Rushville for ten years before coming here.

Grizzard said his favorite part of being a choir director is that he likes seeing kids who come their freshman year and graduate their senior year just to see how they grow up both as singers and as young adults.  He loves seeing the progress from start to finish.

Kottlowski said he admires Grizzard for several reasons. “My favorite thing about Mr. Grizzard is how he directs others to be able to be successful because what he’s been doing is he’s making me a leader to be able to make others leaders,” said Kottlowski.

Kottlowski continued, “I am going to miss the atmosphere because every choir is different. Even if I went to college for the Purdue Glee Club it’s going to be different because there won’t be anybody directing you by yourself.”

Accompanist David Hanson, who has worked with Grizzard for four years, said, “My favorite thing about Mr. Grizzard is that he is a perfectionist and he wants to get the best from his singers. We are both compatible and perfectionists and we both want to have the best musical productions ever.”

Hanson said, “My first impression of Mr. Grizzard was at an audition so it was kind of frightening but he put me at ease and told me what I needed to do.”

Grizzard said that he gets along pretty well with his students.“My most embarrassing moment as a teacher is that I remember being on stage announcing a song and I said ‘Okay their next song is…’ and I had a senior moment and I turned around and the kids told me what song we were singing next,” he said.

Grizzard said that his least favorite part of being a choir director is that motivation is tough. It’s hard to get kids excited to be doing things and riding the line between having a strict class and having fun. It’s always a tough balance, he said.

Outside of teaching, Grizzard likes to go running, he likes to go to concerts with his wife, he likes taking his kids to places like the museum and the zoo, and he likes to work in his garage building little projects. Grizzard talked about how he balanced his work and home life. He said it was difficult these days because he has a five year and a two year old at home, that they require a lot of attention, and that it takes scheduling, and setting time aside for both work and family.

While Grizzard helps to inspire others, he also discussed people who have influenced him. Grizzard said, “My mentor is my mom because she inspired me to get into music and she is a strong woman. My father just passed away. Even though he is gone, she still mentors my family whenever we come to her.”

Speaking of family, choir is often like family for the students. Kottlowski said that his least favorite dad joke that Mr. Grizzard has told is when someone complains, he says, ‘Hi! I’m dad.’