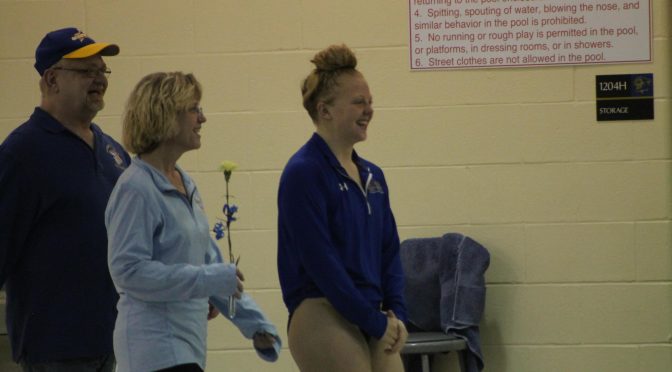 The team has also won the HHC for the second year in a row. The team’s biggest competition so far this season was Pendleton. Johnson said, “Our biggest competitor this year was Pendleton Heights. They beat us in a dual meet, but at the Hoosier Heritage Conference, we came out victorious.” This season, the girls were wanting to win sectionals and hopefully place at state.

Anne Marie DeKeyser, 12, is one of the team’s strongest swimmers as a senior. Heading into sectionals, she said she will focus on her swimming by thinking of her goals as motivation. DeKeyser said, “I will maintain my focus and stamina by thinking of my goals for the season and using them to work hard every day.”

DeKeyser has acquired a lot of knowledge from swimming, but most importantly, she has learned that effort will pay off in the long run. DeKeyser said, “The most important thing that I will take from this season is that hard work pays off later.”

Ashley Swango, also grade 12, said her goal for this season was to bond really well with the team and be victorious in some important events. Swango said, “My goal is to have a stronger bond than ever before, as well as come out on top in both sectionals and conference.”

The seniors have definitely made an impact on Mary Ellen Stratman, 9. She said they have taught her a lot of things this season. Stratman said, “If you put your mind to it you can do anything, I’ve learned that a lot from the seniors this year.” She said that this year, her goal was to get some PRs, personal records, and just have fun.

Norah Johnson, also grade 9, said she has been looking forward to being on the team since she was young. Johnson said, “I am very excited to be swimming this season. It has been something I have been looking forward to since I was in the fifth grade.” She said that even though having practice before and after school does not leave a lot of time to do homework, she has learned how to effectively use class time to manage her school work.

Kayleigh Hite, 11, is happy to be back in the pool as well. Hite said, “I am very excited to be swimming this season. I always enjoy being back in the pool with my second family.” She said the most important thing for me to take away from this season is that you have to block out the negativity and to work hard and stay focused to accomplish your goals.

The team’s biggest competitition so far this season was Pendleton. It was a tough conference win, but the girls were able to come out on top. Johnson said, “Our biggest competitor this year was Pendleton Heights. They beat us in a dual meet, but at the Hoosier Heritage Conference, we came out victorious.” This season, the girls are wanting to win sectionals and hopefully place at state.

The team bonded very well this season. Johnson said, “Our team has bonded during practices, but outside of practice we have team movie nights, dinners, and lock-ins. It is important to get along as a team and encourage each other to do our best.”