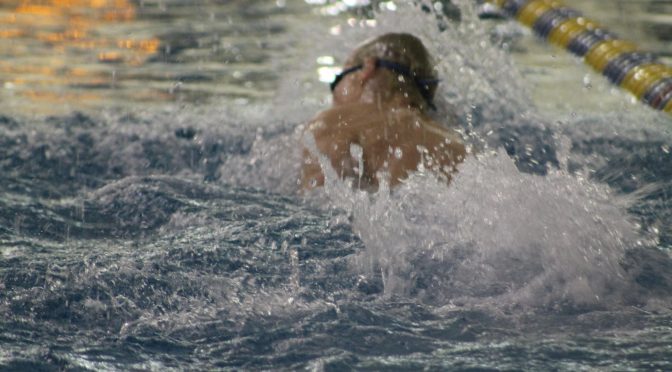 The boys swimming season is coming to an end with a strong finish. They have had a successful season so far. The boys ended up winning their 10th Hoosier Heritage Conference (HHC) title in a row, and are headed into sectionals in a few weeks.

Travis Black, 11, swims sprint freestyle. Black talked about his goals for the season. Black said, “My goal for the end of the season is to go a sub 20 in the 50 free and break the school record in the 100 free.” Black also discussed how he prepared for the season. He said, “Preparation would have to be the preseason and going on the team training trip to Florida. I have been swimming year round for a while now. Preparation is really just showing up to preseason practices and getting excited for the season to start.”

Black’s favorite memory of the season is: “I was at a swim meet in Shelbyville and it was their senior night. One of the kids on the Shelbyville team swam an entire 500 fly. It was amusing and everyone was cheering for him towards the end. It really showed how the sport brings people together.”

The last thing Black talked about was what he learned from being on the team. He said, “I have learned how to manage time and wake up early in the morning. Swimming for an hour and a half before and two hours after school teaches a lot of time management. Morning practices have, over time, turned me into a morning person, and taught me that I need to set one alarm on the other side of the room so I actually get up.”

Samuel Jennings, 12, swims distance freestyle (200/500) free. Jenning’s goal for the season is, “To place top 8 at the ISHAA State Competition.” Jennings talked about his favorite part of the season. He said, “Getting to know and work with newer swimmers.” Jennings also discussed how he prepared for the season “by eating healthy and getting adequate sleep,” he said. The last thing Jennings talked about was how he wants to end the season. Jennings said, “To finish on a good note with the team. I want to leave the team being remembered as a leader and a good teammate.”

Tyler Swango, 9, swims 50 and 100 freestyle. Swango commented on what it’s like being a freshman on the swim team. He said, “Honestly being a freshman is not that bad. You don’t get judged for anything and it is fun being a part of such a great program.”

Swango also discussed his and his team’s goals for the season. Swango said, “My goals going into the season were just to swim two individual events at varsity sectionals and meet my times, but I also ended up in the A 200 free relay so that is very exciting.” Swango continued, “Obviously one of our biggest goals was to win the Conference championship and Sectionals championship for the 10th year in a row.”

The last thing Swango talked about is what he has learned from being on the team. He said, “I have learned that hard work beats talent when talent fails to work hard.” Swango continued, “I have learned that you have to fight through the hard workouts to get better. That is the only reason I have made it all the way to Varsity Sectionals.”

Tyler Osborn, 11, swims Freestyle 200 and 500 and backstroke. Osborn also discussed how he prepared for the season. He said, “I stayed in shape through exercise and I just put in hard effort throughout the time I had pre-season.” Osborn talked about his very specific goals:“My goals are to get 200 (1:54) and 100 Back (0:58).”

Osborn’s favorite part of the season is, “Being able to train and hang out with the team.” He continued, “The team has great work ethic and overall are fun to hang around.” Osborn lastly reflected on what he has learned from being on the season. He said, “I learned with hard work and determination, you can achieve anything you set your mind to.”