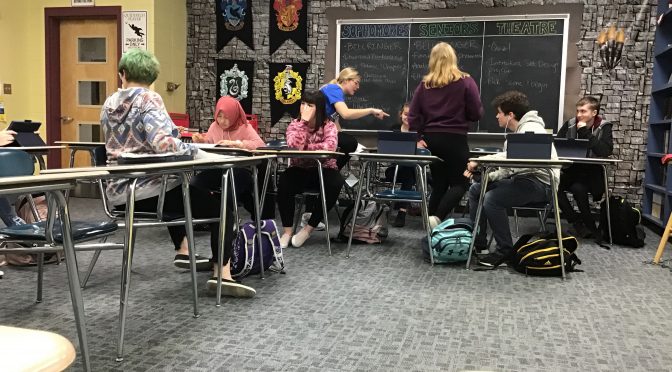 Photo Caption: Mrs. Carolyn Voigt helps a student with an activity on his iPad.

Mrs. Carolyn Voigt has taken on many challenges during her teaching career so far. She is a director for the high school’s drama department and a teacher. She is learning to juggle the long hours at the school for rehearsals, teaching, going home to be with her growing family, as well as finding time for grading assignments.

Voigt had previously attended this high school and is now working here. Taylor Shelton, 9, has a good relationship with Voigt. Shelton said,  “Having Mrs.Voigt as a teacher is like the school just handed you a new friend. She’s kind and understanding.” Shelton said that she had learned from Voigt to be more confident and that it’s alright to make mistakes. She also thinks that others could learn to break out of their shell and be themselves more from Voigt.

Shelton said, “I love that when she teaches, she tries to make sure everyone is having fun.” The first thought that Shelton had when she first walked into Voigt’s room was that she knew she was in a comfortable and safe place. She could also tell that she was going to be happy in her class.

One of Voigt’s fellow English teachers, Mrs. Lisa Fox, was asked what it is like working next to Voigt. She had this to say: “She has lots of kids coming to her asking lots of questions because she has a lot going on. She’s always an up, positive person and she’s always very busy.”

Fox said she has learned a few things about Voigt from working down the hall from her. She said, “Well, she takes on a challenge very positively. She came in at the beginning of the year and didn’t seem intimidated by her challenges and went straight from being a student teacher to a teacher in about a week… She knew what she could do and she didn’t let the kids sway her. So seeing that, I just really have a lot of respect for her.” Fox said from Voigt, others could learn to have confidence in what you know and to stand firm with that.

Voigt said that her first year of teaching was crazy because she started in November of Fall 2016. She had finished her student teaching on a Tuesday and she started teaching on that following Wednesday. Voigt was asked to describe what it feels like to work with people that were once your teachers. She responded with, “It was very weird at first, and I remember being asked by Mr.Beal ‘How are you going to handle having people who were once your teachers be your coworkers?’ And I said ‘Well I understand that I have to gain their respect and I just have to do my work to the best of my ability and eventually they as their peer versus somebody that they had in class.”

Voigt said that her first year of teaching was good and when she came in, they were at a rough spot financially in the sense that they really needed some “Home runners” to be in a good spot for the next year.

Voigt had an important memorable moment during her first year of directing.  “During the Sunday show of Once Upon a Mattress, I was in the booth and the students had all of a sudden turned off the lights and turned off the music and I was freaking out because they hadn’t given their announcements yet. One of the main actors asked me to come up on stage and they handed me flowers and thanked me for everything that year and I just started crying, of course. But it was just so sweet for them to do that at all. It was just this really an awesome moment that throughout all the stress and all the tears that may have happened that first era of teaching, it all was worth it in that one moment.”

The many challenges that Voigt took on led to where she is now. She didn’t give up through the hard times and she stayed persistent. She strives to make time for her home life along with everything else she juggles during her school life.