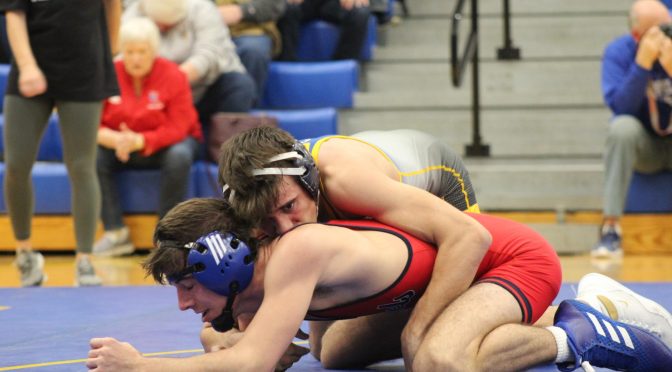 Wrestling is definitely made for strong people. Although the actual match between two wrestlers only takes a few minutes, the wrestling team spends months and months training for their season.

Having to keep track of how much you eat, what you eat, and how much you weigh-in as, is an important key to wrestling.  A special diet ensures the wrestlers of healthy bodies which results in peak performances. Maintaining the proper body weight is crucial to this sport and determines your weight class you will be put in. According to wrestler, Cohen Hager, 9, weighing 113 lbs,  “Definitely having to cut weight and lowering my food intake by a lot” has been a challenge. Knowing the right foods to eat, such as protein, calories, and hydration are important for these athletes. Some of the things the team commented on that are challenging were losing body weight, eating healthier, and just learning how to do different types of moves and putting them into their match.

Jonah Fletcher, 10, has been wrestling for two years now and only plans on getting better and better.  Winning only one of his matches last year, he stepped his game up by winning 11 matches this year.  After asking what his favorite thing about being part of the wrestling team was, he said, “My favorite part is that the team is a family.”

Hager with roughly nine years of wrestling and Sylvester Blevens, 9, with three years of wrestling, both seem to agree that the team is more than just a team. Blevens stated, “My favorite part of wrestling is the brotherhood, whenever I need something or am going through something, they always have my back.”

The team has been working harder than ever to keep improving.  Hager said that he pushes his teammates and encourages them to keep a positive mental and physical state. On January 21, Hager won three out of his three matches in helping GC get second place at the New Palestine Triple Dual.  On December 29 at the Connersville 32 Holiday Invite, Hager got 6th place individually helping GC to get second place overall. With many other successful wins with him lately he is surely headed for success in his career.

With all sports, there comes challenges and obstacles. Blevens, weighing 182 pounds,  stated “My biggest obstacle has been learning shots and using them correctly.” Knowing the right kind of moves and shots to take is beneficial in the sport of wrestling. With all challenges, there comes a moment of success and all the hard work put in, pays off. Even though Blevens stated his obstacle he found a way to comeback from 14 points down to pinning his opponent. That has been his favorite memory of the past three years of wrestling.