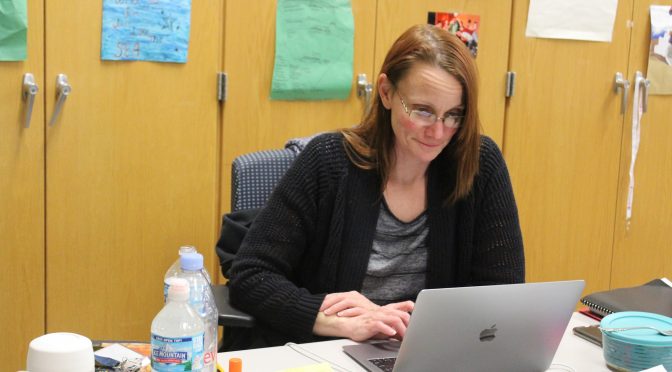 Rebecca Fields, biology teacher, stated of her teaching style, “Sometimes I think my teaching style is a little chaotic, like I have an agenda, and an objective, but sometimes getting there is not very direct.” Her “chaotic” teaching is the majority of her students’ favorite thing about her class.

Fields went to multiple different places for education to get to where she is now. She started at Purdue, followed a professor to Indiana State, went to IUPUI, and lastly finished at IU for her master’s. After her schooling she worked in a laboratory for eight years along with being a camp counselor.

She liked the laboratory, but mentioned that it gets boring. “I worked in the laboratory for eight years; it gets lonely,” she said. When asked what made her want to start teaching she said, “I thought I could take all this fast knowledge I have in my head, and use it to interact with people, and have those moments of being goofy.” Fields also enjoyed being a camp counselor, but she stated she favors the science over the teaching. This led her to focus more on her research involving science.

Following her time in the laboratory, Fields began teaching here at Greenfield-Central for 13 years, and has had a great impact on a majority of her students. She has created a comfortable and positive environment for students to learn in. One of her students, Ava Anderson, 10, stated, “She’s made it fun to learn and made me want to learn more about biology.” Many students have expressed that they enjoy her stories that she has told when teaching.

People describe Fields in many different ways, but she would describe herself as “a normal, introverted person.” She is a very laid back, down to earth person. She is described as a great listener, and she is also very curious. “I listen, then want to solve problems,” she said. Her students described her as laid back and understanding.

Anderson mentioned that Fields  is a “spunky” person. Anderson stated, “She doesn’t care what anyone thinks about her. One of my favorite things about her is she told me she gets dressed in the dark, so that her outfits never make sense.”

One aspect that many other students have said to like about her, is that she gives them their space. Another one of her students, Kearsten Stearns, 9, “She’s one of those teachers that’s not always up in your face.” Anderson added onto that by saying, “She leaves students alone, but also makes sure everyone understands the lesson and gets their work done.” To Fields, it is very important that students do their best, she said.

Fields has a goal for all of her students. She wants them to be able to have a basic knowledge of science and also be able to apply it to their lives. “I hope my students get the ability to take information, find a solution, use the solution, and then re-adjust,” she said.  Fields hopes her students can develop problem-solving skills to help them confront real life problems, rather than emotions. She said, “We’re all so emotionally-driven; you have to stop and learn to use the brain.”