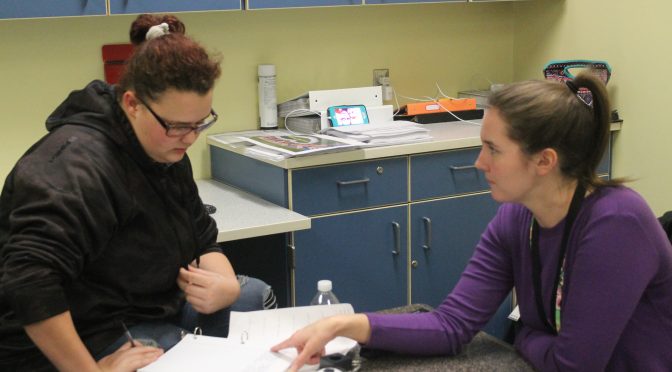 Mrs. Laura Mann has been a teacher for over seven years. She worked for one year at the junior high and five years at North Montgomery High School. She is currently a dedicated math teacher, coaches the girls soccer team at GC, and is also a wife and mother of two children. She still finds time to help her students and raise kids who also love to play soccer.  With so many things on her plate you have to wonder how she finds time for it all.

Mann didn’t always know that she wanted to become a teacher. When she went to college she was getting an engineering major. In her freshman year of college she started to do coaching with her professor, and did that through her junior year.  Then, she was asked by the Central Catholic girls varsity coach to be an assistant over the summer. As she helped coach the girls during the summer she began to realize that this was something she loves to do. Mann said, “After that summer I knew that I wanted to work with kids.” So she went after her teaching degree.

Now she has been teaching for seven years and loves every day of it. She said that the best part of being a teacher was being able to build a relationship with her students. She loves to see her students inside and outside the classroom. Emma Colassaco, 9, said this about her relationship: “We don’t always talk about soccer stuff; we also talk about how we are doing and other lives.”  She even talked about one of her previous students she had babysit for her when she had her first child. She said that they still talk to this day.

When she discussed if having kids changed her view point of students, she said no. That she sees her students as her kids even before she had kids of her own. She also stated how important they were to her and how she would do anything for them within reason. Mann said, “I feel like having kids just gave me another level to connect with them on.”

Rebekah Pies, also 9, enjoys having that relationship and said,“She’s a really bubbly, a good person and teacher.” Mann says it also the same way with her kids, having students didn’t affect the way she saw raising her kids because her personality is the same when she’s at home and in the classroom. She said that even if her kids would walk into the classroom and they would still be like “Yeah, that’s my mom.” She also says that she wants her students to see her as a person not just their teacher.

When Mann talked about how she manages having to teach, coach, and raise her kids she had two things to say. The first is that she finds that having good time management is a must on knowing when to get what done. Then she said that it’s easy to handle all of it because she put 100% into what she’s doing at the moment she is doing it.  When she’s teaching, she is “in 100% teacher mode not 90% teacher mode and 10% coach mode.” When she’s doing something she says she wants to be 100% present in doing that thing. “I want to be present in whatever I’m doing”. Colassaco said, “As a coach she’s more strict and is always ready to make us do something out of our comfort zone.”

As for what Mann wants her students to get out of her classroom, she wants them to know this: “It’s okay to make mistakes, to learn from the people around them, and to know that I care about them.”