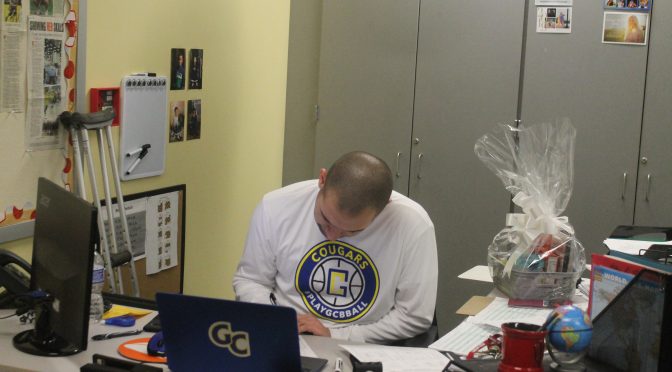 Photo Caption: Bradley Key, social studies teacher and coach, finds a spare minute to work on paperwork in his classroom.

GC teacher and basketball coach Bradley Key has been teaching for over 10 years and has been coaching for many years as well. Key spends most of his time coaching with his team, especially currently since it’s basketball season, teaching his students and educating them on current events, and listening to pop-country music. He puts effort into those he cares for and puts his heart into what he loves, and what he truly loves is his job. “There are definitely some extreme highs, and extreme lows of teaching, especially freshmen… but it’s worth it. It’s good knowing my kids went home knowing something they maybe didn’t know before, and that’s the best part about it.” Key said, explaining the best and worst parts of his job. So what more should be known about Key? Who does he influence, and how?

Duriing his entire life, he grew up raised and influenced in the presence of teachers, and sports. He’s always been into sports. “I was never the best of the best, you know? Never the best player on the team. But I was always kind of the leader of the team, always putting out ‘Go, team!’ if no one else would,” Key said.

Teachers were always around him, even as family, he said. The life of educating people intrigued him, he said.  It made him think… “What can I do for the world? Who can I educate? Whose point of view could I change, how could I do that?”  So he put his game face on the same way he did in his sports career. He took his passion for shooting a ball and combined it with his passion for making a positive difference for young adults in the world. He was always a good student, always the one making the right decision, using his head, he said. That’s what got him to where he is now: an intelligent, educated, caring teacher, and a hard-working, team player, carefully blunt basketball coach.

Most of his students get along very well with him. He’s a fun, outgoing, opinionated man with a good sense of humor, some would say. One of his current students, Lindsey Kirby, 10, feels positively about him and his teaching. “He’s just a funny guy,” she explained, “in the beginning of class we discuss current events, funny stories, hot topics, stuff that everyone is really interested in and it gets everyone going, really. It’s his sense of humor that keeps the class alive and I think that’s his best feature.”

Kaitlyn Garner, 9, said, “He’s been a great teacher. He always goes over the most important things going on in the world and it’s a great thing that he gets everyone so involved in politics and the world.”

Key truly wants the best for all the people in the building, especially for his students and team players, he said. “I think it’s good to talk politics into kids here, because you really never know what life is like at home. Everyone deserves to have their own point of view, so if they don’t talk about it at home, let’s talk about it in my room,” he said.

“Maybe mom and dad don’t talk about the news or stuff like that at home, or maybe mom or dad isn’t even around. It’s good seeing my students transform from completely uneducated… children, really, into informed citizens of our community, and of our country. It’s good to make everyone stronger and smarter one step at a time,” Key said, on why he discusses political views and current events with his students.