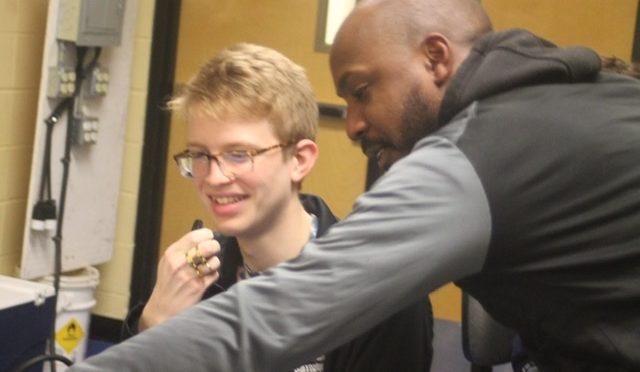 Music secretary Jeremy Turner, who has spent many hours helping marching band and drama students, said, “My favorite part of being the music secretary is the interactions I have with all the performing arts students.”

Turner, who is also pursuing his bachelor’s degree in music education, talked about how he balances his work and home life in a department that hosts countless practices, concerts, and other performances. Turner said, “What home life? I go home and work, that is what I do. I wake up, I come back and I work more. It’s cool, man. I probably end up staying up a little bit later than I would most times.”

Marching band director Chris Wing talked about his first impression of Turner. Wing said, “My first impression of JT was was that he was young and excited to teach kids.” Because of all the hours spent at practice and beyond, Wing and Turner know each other pretty well.  Wing said, “I like working with JT. Some days he drives me crazy but for the most part he does a really nice job and works hard. My least favorite part of working with JT is that he distracts me. We spend too much time together and we’re too good of friends. I get distracted from my work too easily.”

Wing added, “My favorite thing about working with JT is that I laugh with him just about every day.”

For his part, Turner said, “My mentor is Mr. Wing. I know it’s weird because he’s like one of my best friends and also my coworker and also my boss. I can’t think of anyone else that I could go to when I need guidance.”

A.J. Springman, 10,  has known JT since 8th grade. Springman, who is in concert choir now but was in band previously, said, “My favorite thing about JT is his humor. His humor is unbelievable. I was in band in 8th grade and I was beat-boxing and he was joking about having me be a part of the front line just like sitting there with a mic being the drum line.”  Springman talked about what he is going to miss about JT when he switches schools next year. Springman said, “I can’t pinpoint one thing that I am going to miss about JT when I leave next year to go to my new school because JT is just an amazing person overall.”

When the marching band won state in November at Lucas Oil Stadium, naturally almost everyone in the program was excited. Turner described the moment: “I felt really good for a number of different reasons. I don’t know if I can quite still say how cool it was, not necessarily for me, in particular, but for the program as a whole thinking about the journey we’ve been on from 2012 to now to the top of the pyramid. I think when they said second place, whoever it was, and we realized we won I felt all of that. I felt all of the times we came up just a little bit short and of all the times where things didn’t necessarily go the way we would have hoped. Of all the times that there were kids that were there that band was their safe place and they couldn’t necessarily go anywhere else. I felt all of that again. That was the cherry on top of all we’ve done so far.”