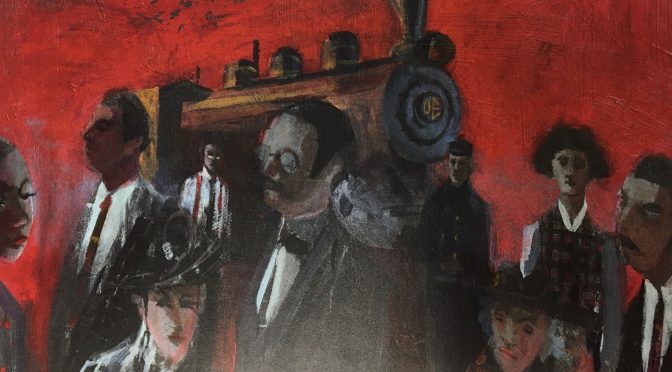 The stage adaptation of Murder on the Orient Express was written by Ken Ludwig and is based on the Agatha Christie novel of the same name. The story follows Hercule Poirot, a detective who must find a murderer among a lineup of passengers, a conductor, and an old train owner friend, all while being stranded on a train that has a diminishing supply of provisions. The victim is a man named Samuel Ratchett, who receives eight stab wounds in the wee hours of the morning. Simultaneously, the Orient Express hits a snow bank, forcing Poirot to solve the crime quickly, lest the killer strike again.

The seven passengers and the conductor accused of the crime are Colonel Arbuthnot, his wife Mary Debenham, Helen Hubbard, Hector McQueen, Princess Dragomiroff, her assistant Greta Ohlsson, and Countess Andrenyi. All of them are unique characters, but they all share something in common: resentment of Samuel Ratchett and a common motive for killing him.

Shortly after discovering Ratchett dead, Poirot finds a clue that reads, “Remember Daisy Armstrong.” Daisy was a five-year-old girl who was abducted and then killed in New York. It was revealed soon after the discovery of the clue that Ratchett had been the one to murder the girl. All of the passengers had connections to Daisy, so all of them had a motive for killing him.

So if all of the passengers had the same motive, how did Poirot find the killer? The reveal near the end of the show answers that question. The conductor and the passengers claim that they had all seen a second conductor on the train, despite the fact that there was supposed to be only one. However, they all banded together to create this story to hide the real murderer: each and every one of them.

Ratchett had eight stab wounds, “some weak and some strong.” The reason that he had eight separate wounds of varying intensity was because eight different people, the passengers and conductor, had stabbed him. They all sought revenge for Daisy’s death and attempted to elude capture by coordinating alibis and lying about a mysterious figure on the train. Poirot, however, was clever enough to see through their lies.

While the idea of all of the suspects taking part in the murder is an interesting concept, I think that the story would have benefitted more from a more traditional ending. Poirot states at the closing of the production that there were two possible solutions: that all eight had killed Ratchett, or an unidentified person had broken in to the train and left before he/she was detected. However, the latter solution contradicts a statement that Poirot made earlier: “No one could have entered the train because there are no footsteps in the snow. This was an inside job.” If Poirot had just presented the eight-killers solution in a sure manner instead of offering up the idea he had already proven wrong, then I feel that the audience and I would have been more astounded by the twist ending.

While the ending of the tale was underwhelming, the overall professionalism and attention to detail portrayed by the cast and crew for this production was phenomenal. The most unique aspect of the show was the set and scene changes. Three different settings were used when on the train: three bedroom units, a dining unit, and a lobby unit. However, instead of having blackouts for scene changes, the three locations were set on a round platform that rotated counter-clockwise. Whenever a scene ended and a new scene was to be ushered in, the characters would freeze on the moving platform and let the platform carry them backstage. Meanwhile, the new setting would spin around, making the transitions simple and quick.

Another aspect of the technical design that added to the uniqueness of the show was the use of various lighting designs. A plethora of lighting gel colors were used, such as shades of red, blue, orange, pink, and purple. The gels were utilized to exhibit the mood being portrayed in a particular scene. For example, when the passengers discovered Mary Debenham unconscious on the ground with a bullet in her arm, the lights were switched to appear a deep red to show the intensity of the scene.

The use of spotlights also add character to the show. Near the end when the crime is about to be solved, Poirot explains the events and the characters act them out as a flashback. To show that their actions were of the past, the lights are dimmed and spotlights shone on the actors portraying a past event. The spotlights create a contrast between the past and the present so that audience members can tell what is happening at the time and what events had already taken place.

IRT always goes above and beyond with their shows and Murder on the Orient Express is no different. While the story and the ending of the show were not particularly satisfying, the show is still worth seeing because of the incredible technical design and the professionalism of the cast and crew.