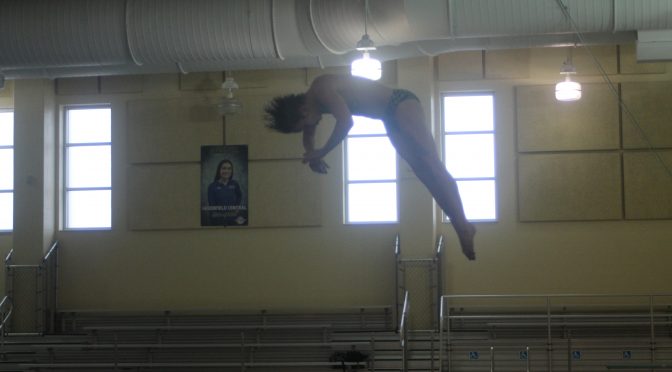 Diver Kien Dalton, 10, went to compete in state this past weekend. Dalton described how he felt about going: “Last year I was one place off from making it to state. I was just excited to be even close to going, but to actually be able to go to definitely more exciting. It’s an exhilarating feeling. It’s nice to know that my hard work is paying off.” Only two years into his diving career, Dalton placed 17th overall in state.

During this particular season, Dalton has learned from his mistakes and has gathered what he needs to succeed further on and place better. “I’ll take more moral value of what I need to focus on next year and just how I need to operate within diving meets so I make sure that I am on top of my game.” Even with the success of making it to state, Dalton says he still strives for more.

The diving coach, Duan Knecht, is just as excited as Dalton. “In my twenty years of coaching, Kien will be my 15th diver going to state. It’s rewarding to see how many I can get there (state).”

His fellow swim mate, Alex Jahrsdoerfer, 9, on the other hand has been diving for the past seven years. He currently holds the middle school record of four dives with a total of 125 points, which he has beaten twice. However, the hardest challenge for Jahrsdoerfer was the difference between diving in middle and high school. Divers only have to do three or four dives in middle, but in high school, they have to do a total of eleven dives at each meet.

“That’s an accomplishment in itself, ” commented Coach Duane. He explained that learning all the new dives and techniques needed is a major challenge Jahrsdoerfer faced. “That’s a big step coming from junior to high school.”

From this experience Coach Duane wants them to learn where true hard work can get you. “If you can put the effort in, then you can learn a lot. It shows what hard work really does.” Both Dalton and Jahrsdoerfer can take what they learn about hard work from diving into real life situations.