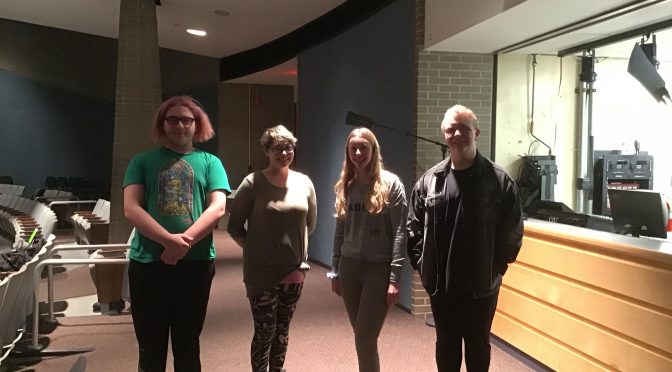 Photo Caption: David Hull, 10,  Jessica Rudd, 9, Elizabeth Harris, 12,  and Camden Fitzgerald, 9, are in the publicity crew for the drama club.

The publicity crew is as busy as ever, setting up for Footloose, with setting up locker decorations, making the playbill, and putting up posters around the school. Elizabeth Harris, 12, is the head of this crew and loves her job. Some of her favorite parts of this position are decorating the lobby before shows, leading her fellow peers, and meeting new people every year. With the nice parts, there are always the downsides. “For me, I’m in the show, co-head of paint, and head of publicity so it’s really important that I have other people to rely on for work to get done,” Harris said.

This crew usually does the same things for every show, just different things to spice it up and make it unique. Another big help is Mrs. Carolyn Voigt, the drama director. “I like working with her because she’s really nice and helps bring everything together. She also helps come up with ideas for us and helps with the playbill because it’s so difficult to make and put together,” said Harris.

Almost every show, there are new faces running around either in the crews or as actors on stage. Harris said, “I really like working with new people, it’s exciting because you obviously get to meet new faces and help them with their work.”

Addie Coombs, 9, has never been in publicity before; instead she has been in paint. “I originally decided to join publicity just in case my main crew choice, paint, was full but now that I’ve worked with Elizabeth for a while I’ve stayed to help give the show as much good publicity and attention as possible.”  Coombs also adds, “I don’t believe the publicity crew gets enough recognition, but then again all of the tech crews in drama productions don’t get recognition just because all of the crews are the basis of such a good show and back up actors.”

Of course, this crew is needed just as much as any other crew. Without them, you would not see posters, hear announcements, or see locker decorations. Camden Fitzgerald, 9, is also doing publicity for the first time this show. “I think my favorite part is most likely the people because they make it so much fun while doing the (sometimes tedious) work.”

With rehearsals only starting a few weeks ago, this crew has already put in many hours of work. With the show being in May, they will work toward getting the job done.