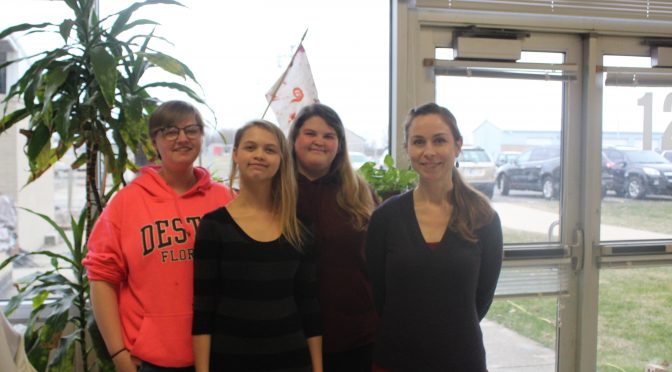 “Before I joined the Sunshine Society, I just thought that they were a bunch of hippies,” Alyssa McFall, 12, said, laughing, “but when I joined I found out that it was just a bunch of people wanting to help raise money for Riley (Children’s Hospital).”

The Sunshine Society is one of the many student-led clubs at GC. Current members are McFall (President), Andrea Thompson (President), Amanda Thompson, Lily Enriquez, Meadow Duncan, Corbinn Ailes, Jesse Meeks, and they would like to have new members. They work year-round to help the community and school.

A lot of people don’t know what exactly the Sunshine Society does. The main point of their club is to raise money for Riley and other non-profit organizations. Currently there are only two fundraisers a year. McFall also said, “Something that I would like for the club to do in the future is to have more fundraisers, since right now we only do two.”  The two fundraisers that they do are the Boo grams (cauldrons + treat bags) in October and the Crush cans in February. They work very hard to raise money through these fundraisers and even raised over $100 through the Crush cans. “I think it makes an impact because it brings the school together as a community and raises money for Riley and families who need it,” McFall stated.

The members of the club work very hard to raise money for these non-profit organizations.“We have seven members total, but we only have about five that actually participate and go to all the meetings,” Andrea Thompson said. “And it’s very hard when there’s so few members because if someone can’t run the table at lunch one day, it’s most likely that no one is going to run it and we won’t be able to raise money that day.”

When the club gets more people to join, it is most likely that they will be able to do more fundraisers and raise money for more than just Riley and get the word out more. “In the future I would like the club to continue to grow and get more people because it was originally only for girls so getting some boys would be great,” Mrs. Lisa Sears said. “If anyone wants to join there will be a meeting held on April 10th after spring break.”

When the club members were talking about what they wanted their fellow students to know, this is what they had to say, “We want people to know that when we do fundraisers that they should actually donate because it’s going towards a good cause. And we want to make a positive change in the community,” Andrea Thompson said.  The Crush cans and Boo grams aren’t just going on to give the school more holiday cheer, they’re also here to help the community and raise money for a good cause. “We also want to start a new fundraiser where you can buy a paper hand for two dollars, and all the hands collected will be made into a piece of art. Also there will be a name drawn from who bought a hand and their table will get pizza for lunch,” said Sears.

The members in the club hope to have a positive influence on the school and community, but it also has an impact on the students in the club. “My favorite thing about the club is that we get to see people who you wouldn’t expect to donate, donate,” McFall said. “It also has opened my eyes to the fact that there are good people out there willing to help”

Andrea Thompson said that the club made her more of a genuinely happy person and generally more positive. She said it also has helped her with communication and leadership skills. “What I like about the club is that it has a very family oriented atmosphere and once you join you feel like family.”

Amanda Thompson added, “I’ve become a lot more open with my problems and we all grew really close.” Sears also said, “I’ve gotten to know some of them really well and I don’t have them in my class, so I wouldn’t have gotten to know them otherwise.”

“What I want people to think of when they see Sunshine Society is that we are good people wanting to help out our community and the people in it,” Amanda Thompson said.