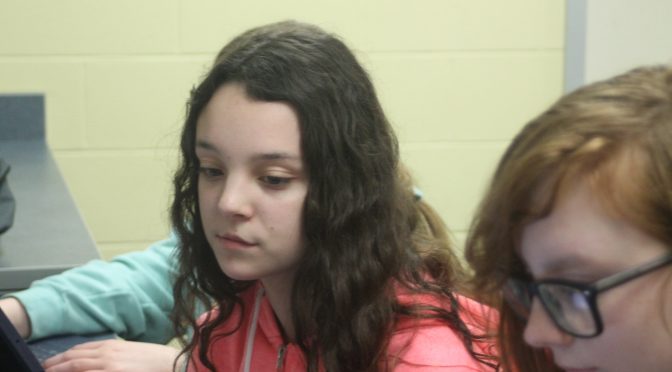 Photo Caption: Nevaeh Stewart, 9, talks to Summer Terry, 9, about the possibility of an art club.

A lot of kids draw in their free time here in GCHS, so I thought, why not ask them about an art club? We don’t really have art clubs here, and I think we should. These are some of the students’ opinions on having one.

One of the first I asked was Carmichael. “I would like to be a part of something,” she said. “I think it would be really fun to join,”

Of course, I’m no expert at knowing what people would want, so I went ahead and asked what they’d expect it to be like.

“Just a place to share common interests and art, perhaps a bit of constructive criticism if wanted,” said Carmichael.

“I think that an art club would be a good place for students to work on personal projects. It would also be great to have art club students do collaborative projects for the community, such as painting murals and artwork for the school, or even doing face painting at events,” said Ms. Hannah Johnson, 2D Art teacher.

Students say they’d go alone, but would consider asking their friends to join. Most think having an all-in-one art club would be fun.

“I think it would be a lot of fun and motivating if we got to do projects for the school,” said Carmichael. “I prefer drawing and 2D art, (but) I think an all in one would be fun!”

Of course, like any other subject, some people don’t enjoy it that much. “No, (I wouldn’t join) because I don’t like art that much,” said Nevaeh Stewart, 9. She said if she did, she would go “with friends to feel more comfortable” and she would expect to “learn more about art.”