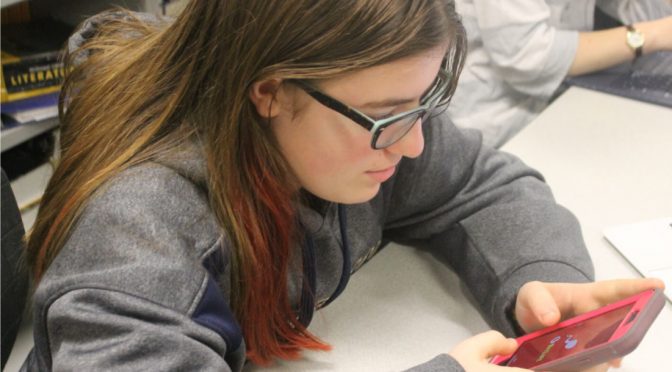 Photo Caption: Jessica Harris, 9, uses her phone in the classroom to supplement her learning.

Phones in the classroom have their ups and downs. They can either benefit students or do the complete opposite. According to most people it does the opposite. Some students abuse their right to have a phone in class and use it when they shouldn’t. There are also kids who do use their phones appropriately for academic purposes.

Phones can provide many benefits if used appropriately. Mrs. Laken Rosing stated, “I try to teach students how to use them in an adult way.” If students use phones in a way that doesn’t interrupt class or distract themselves. They can be used effectively and possibly even produce positive results. Jerimiah Edwards, 9, stated, “Phones can be used well if kids don’t have their iPads and their phones could replace it.”

There are times when phones are definitely a no go. Rosing stated, “There is no reason to have it out during presentations, tests, quizzes, and etc.” Then Ms. Jennifer Holzhausen also goes on to state, “My general expectation is for phones to be put away at all times.” These expectations are guidelines that are usually set in most classrooms, especially on tests and such because they are, of course, assessments.

A common issue is deciding whether or not that there should be a wide school policy with phones. Right now GC does not have one in particular. Rosing and Holzhausen both thought that a blanket policy wouldn’t really work because it depends on maturity. Freshmen are more likely to use their phones more while juniors are more likely to understand that it isn’t appropriate. Dessy Taulman-Franklin, 12,  stated, “In the end it is really about maturity and how you as a person can handle yourself.” On the other hand Ms. Michelle Rennier stated, “There should be a policy that if they are caught using their phones inappropriately that they should be taken away.”

Another thing Rennier touched on was how phones affect life outside of the classroom. Conflict is a big issue that most of the time happens on phones that then transfers to real life. This also affects the inside of the classroom because this drama that usually happens on the phone puts this student in a bad mood, making them subject to not doing their class work or not doing anything at all.

According to Holzhausen, “Banning the phones in the classroom hasn’t shown great improvement, but it does decrease the amount of cheaters.” Cheating is another big reason why phones can be an issue in the classroom. Cheating is a prevalent issue that doesn’t show real improvement in a student. This also causes teachers to view the use of phones negatively.

One of the biggest problems for phones in the classroom is the issue with social media. Edwards believes that if social media wasn’t available, phones would be a lot less of a distraction. Taulman-Franklin also expresses her opinion on social media on phones being a distraction. She said, “Yes because it would be less of distraction and help more academically.”