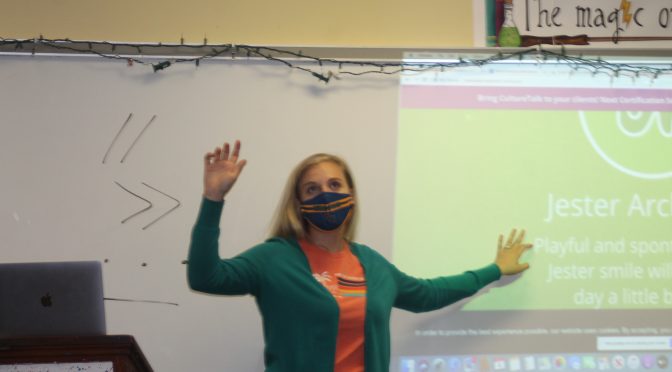 Mrs. Carolyn Voigt is a teacher at GC, going on three years now.  She is teaching Theater Arts, Speech, and Tech Communications.  On the side, Mrs. Voigt is in charge of the Drama Club and the Drama Club’s productions.  She strives to create an atmosphere that is perfect for learning and engaging her students’ creativity.

Having gone to school at GCHS when she was younger, then Ball State for her teaching career, Mrs. Voigt then came back to begin her teaching career.  At Ball State University, she took theatre classes and even joined the Alpha Omicron Pi and Theatre Education Club.  However, she didn’t see herself teaching Tech Communications until she came to GC.  Luckily, she says she loves it.

Having three years of productions she has directed for GC, she says her favorite was GC’s production of High School Musical.  In addition to directing plays and musicals with the Drama Club, she also starts workshops for the Drama Club members.  These workshops can vary from learning how to master the technology side to drama productions to dancing to singing, and so much more.

“She introduced me to a brand new perspective of acting.  The way she influences us by encouraging us and giving small tips is why she has been such a great teacher,” says junior student Leah Olin, 11.  Jeremy Turner, the music department secretary and assistant band director, backs that up when he mentions how he has only known her for a year but feels as if they’ve been friends for a long time or she could be his long lost sister from the way they laugh when together.

Mr. Turner also mentions her many wonderful qualities.  “I would describe Mrs. Voigt as helpful, compassionate, and understanding,” he says.  Mrs. Voigt thinks very highly of all her students, describing them as “…bright, funny, and energetic…”  She says their motivation to learn makes the experience all the more fun.

Getting ready for this year is hard, Mrs Voigt says, because of quarantining and the hybrid schedule.  However, she states she is taking it one stride at a time.  She is trying to include everyone in this new, trying circumstance, so as not to be “unfair” and leave students out when they can’t go to the school, she says.

Olin states, “She is very forgiving and doesn’t get frustrated even when everyone is misbehaving or not listening.”  She also says that Mrs. Voigt is creative, kind, has a big heart, and puts all her heart and effort into what she is doing.  Olin isn’t alone when she makes this statement.  Mr. Turner says, “She’s so stinking wonderful!”

Although Mr. Turner hasn’t seen Mrs. Voigt much when she was in directing mode, he does mention how the cast members always seem to be “itching” to get back to learning how best to put on the play under Mrs. Voigt’s guidance.  He says, “She has this way of giving each member their own responsibilities that they then take pride in completingor accomplishing to the best of their abilities.”  Not only does she put on productions with the Drama Club, she also teaches students how to better act and emote in her Theatre Arts class.

Mrs. Voigt enjoys her job and the students she teaches.  She says, “I love teaching…All of the students are so bright, funny, and energetic that I find myself laughing a lot and enjoying how much they want to learn about the subject and are motivated to do so.”