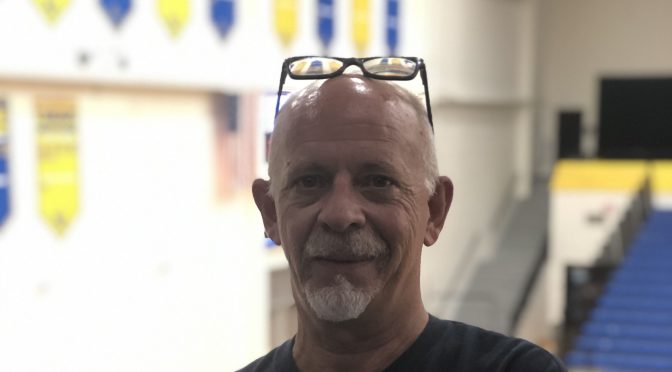 Photo Caption: John Painter, producer of NineStar Sports as well as the creator of NineStar’s local TV channel, at a recent volleyball match between New Castle and Greenfield, just before filming begins on Sep. 10, 2020.

In the absolute black of night, only illuminated by the obnoxious shine of automobile lights and the blast of the football field fluorescents, a man emerged from the sea of moving cars and wandering people in the parking lot to greet one man: John Painter. They talked briefly, speaking of the man’s newborn and his hopes to return to broadcasting. There was nothing awfully unique about this occasion; to a wandering eye it may seem as though it was just as simple as small talk. What was really significant about this occasion wasn’t that it happened, but that, in fact, it seemed to happen all the time. From country club bartending to tarring a factory roof, to being a computer technician at General Motors, and even a plant manager for NineStar, it seems as though Painter has been all over the world, and as though all the world knows him.

“All my life, I have loved to create and have always spent time creating in all types of different forms,” elaborated Painter when asked about the best aspects of his job at NineStar. “The position NineStar has put me in is one that they give me the freedom to be creative in many forms.” While Painter has certainly shuffled around in his career, he now finds himself the producer of NineStar Sports as well as the creator of NineStar’s local TV channel. NineStar Connect is an energy and communications company based in East Central Indiana that provides a number of services including water, electric, and internet, and also as a result of Painter’s work in the company, a local TV channel. Painter has worked with the company for several years, and went onto explain the many positions he had held in the span of time, stating, “Again, I love to be creative. I have held many positions with NineStar, from a telephone lineman, to maintaining the digital headend, and even supervisory roles with outside plant.”

In the early hours of the day, through sizzling heat and bitter rain, one can find Painter at one of the local high school football stadiums, basketball courts, baseball fields, or even wrestling rooms setting up for a rigorous night of recording. He can be seen running cables out to cameras, setting up laptops for editing and rendering, and more time-consuming, tiresome work. “Growing up on a farm, hard work has always been instilled in me by my upbringing,” he pondered in consideration of the tediousness of it all. “I do enjoy it because once we finish, there is a great sense of accomplishment and much satisfaction. I guess because I am just driven by sort of an obsession with those games that I do not feel any fatigue or pain until the next morning.” But even after all the arduous set-up and labor, when the game begins, whatever it is, Painter runs the show like a trainer runs a well-disciplined mustang on a dirt-ridden horse track.

“I think John possesses a combination of mental fortitude and experience that is perfect for how stressful and nerve-wracking productions can be most of the time,” illustrated Dave Anderson, camera operator for NineStar Films, the team responsible for the filming of local county sports games. Anderson is an established and consistent member of the team, having worked there for nearly four years. “There have been many times over the years that have solidified my faith in John as a producer. Whenever there are technical difficulties with our equipment or there are outside factors beyond our control, John just deals with it or fixes the problem if he can,” elucidated Anderson, “He never gets mentally flustered or panicked, which is pretty remarkable considering some of the things we have had to deal with over the years.” Painter runs a consistently collected and calm ship and maintains a level of quality that is undeniable.

As one could surmise, Painter seems to possess the work ethic of an ox, never failing his responsibilities and always moving forward. “John is different from others in that he is a one-man army,” Bill McKenna, Greenfield-Central Radio/TV teacher and director at NineStar Films, attempted to explain, stating, “He is producing, engineering, and doing all the production jobs himself, every other team is full, John has only himself. He teaches himself new technology, he finds a way, [he’s] self-reliant.” McKenna has been working with Painter for six years and even knew him as a child. “We both were kids during the blizzard of 1978, we both had adventures, mine in the city and his in the country,” McKenna mentioned. “[He] and his dad went out in the storm and worked; I just had an awesome snowball fight. He told me about what it was like to work with his Dad tending to the cows as this epic storm engulfed them. His youth made him who he is.” McKenna has worked in the industry for many years, even working under Channel 6 for some time, as well as ABC. Yet he notices something different in Painter as a producer, simply stating, “He stays with what is good in life. I’ve never worked with anybody as good as him.”

Unfortunately, no matter how fantastic a man like Painter is, especially in the industry, the reality is sports are on the decline. According to research firm Ampere Analysis, viewers aged 18 to 24 are the least interested in sports as a genre in broadcasting, and it seems that participation in sports is decreasing, according to the National Federation of State High School Associations (NFHS). Talent and hard work can only do so much if the viewer doesn’t care. In considering this, Painter elaborated on his perspective of it: “I watch old sporting broadcasts on YouTube from the 60’s, 70’s, and 80’s. The broadcast was all about the players and the action, period. Total focus was with the game. And it was normally only positive commentary. There was not all the flashy motion graphics and such. It was simple and was all about the game, which is what people have tuned in for. That’s just me. I like the broadcast to be all positive and not overdone with flashy glitz and glamour.”

Even with all the sweat, blood, and tears Painter puts into his work, he doesn’t complain much nor does he think much needs to change. When asked about changes he would like to make to his current job, he simply retorted, “Well, I guess I would like to see us be able to have permanent cabling at all of our stadiums and gyms, so that we wouldn’t have to set-up and break-down for every broadcast. That would be nice!” McKenna attested to Painter’s absolutely solid mentality, explaining, “He goes well beyond what he has to do in his work. He swings for the fences and never gives up. We have had games in tough weather I would have bailed on, but he stays with it and we get stuff done when it looks impossible.”

What lies ahead for John could be an innumerable amount of situations, considering his career, but it seems as though for now Painter is planting his feet in broadcasting. Despite the painstaking labor and the decline in popularity, it is where he chooses to stay, even stating, “I hope to be doing pretty much what I am doing now with NineStar until I retire. However, retirement for me will probably be full of video production, photography, or graphic arts. Maybe as freelance even.” So, whatever Painter ends up doing or wherever he ends up working, he’ll keep it cool and work himself like a lawnmower, and plenty of people from all across his career will see him there and won’t be able to refuse saying hi.