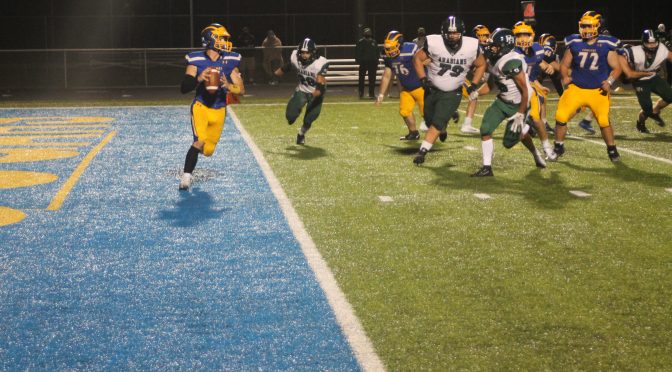 Photo Caption: Lance McKee, 12, looks for an open man in the Homecoming game against Pendleton Heights. Photo by Kye Jocham

Throughout the United States, and the rest of the planet, high school football teams all over have had to adjust to the different world people are living in with the coronavirus pandemic; this is no different for the Greenfield-Central Cougars. The pandemic has brought many challenges and obstacles for the Cougars team, but Coach Nolting and staff are working to prepare the Cougars for success in the upcoming season.

Speaking with some of the players from the team, they discussed how well Nolting and the Cougars staff have done handling the situation. Running back Brayden Herrell, 10, said, “Coach Nolting and all of the staff have handled the pandemic situation better than we all thought it could be handled. Before school started, most people thought we had no chance of playing, but the coaches want to play, and are keeping us safe at the same time. They try their best to keep us all socially distanced on the sidelines and when we are not in drills. Our safety is their number one priority right now.” It’s not just Herrell who feels the Cougars staff has done a wonderful job dealing with the pandemic. Chris O’Connor, 12, said, “The coaches have done everything they possibly can to ensure that we play football. They have done a great job throughout the whole situation.”

When it comes to being on the field, Cougars players are optimistic in the progress they have made throughout the off-season, and their potential in the season ahead. Quarterback Lance McKee, 12, commented on the improvements made throughout the off-season, “The biggest improvements I have seen from our team this off-season is how much bigger, faster, and stronger we are now compared to last season. We have had multiple guys gain as much as 30 pounds of muscle.” Hearing the players talk about the off-season, and the areas in which they have made the biggest efforts in, you quickly get an understanding of just how much progress they feel the team has made from last year to this year.

With the strides they have made during the off-season, and the job the Cougars coaching staff has done to prepare them for the season, optimism among the players for potential success in the upcoming season is high. Brayden Herrell, 10, was among those with optimism going into the new year. “I think this team we have could shock a lot of people. Losing around only 5 seniors last year, we have only gotten bigger, faster, and stronger. Last year we were young and in a first-year offense, which really does make a big difference. We definitely have the potential; we just need to go out there and ball.” Hearing these comments, and other optimistic feedback, the Cougars seem to be in a good place mentally, and on the field going into the 2020-21 season.

It’s not just the players who trust the process the Cougars have gone through during these times. Head Coach Travis Nolting recapped some of the biggest challenges the team has faced due to the pandemic, and stated that he feels he and his staff have done a nice job of handling it. “We lost all of the spring session and most of the summer. Once back in school we were hit with a 14 day quarantine and missed practices as well. We have also had to add lifting into the practice times due to the hybrid schedule. Most players are only in my class 1 day per week on site, which we have had to address by lifting on Thursdays after school to fulfill that need. We have had to be ready and adapt to changes as they come. I think our staff has done a good job overall in handling the new challenges.” Along with this, Nolting is also happy with how his players have progressed over the off-season, saying he was proud of the commitment the players have shown, and that they get better every day.