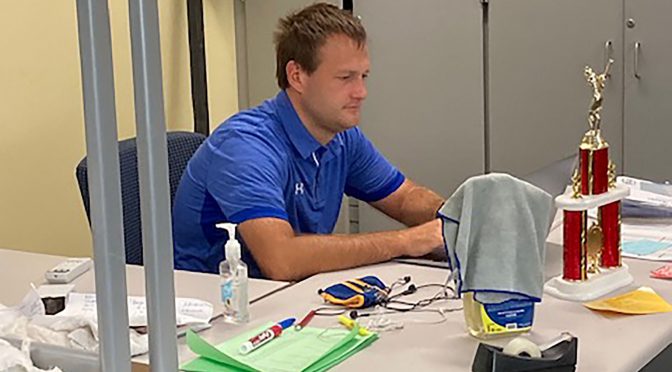 Head coach of the varsity girls and boys golf team Russ Wiley is looking for more outstanding seasons to add to his belt of previous successes. Coach Wiley is not only a teacher and golf coach, but also a family man. He lives with his wife and three daughters.

Coach Wiley has had past success and showed coaching skill with both golf teams, including a 16-1 season last year with the girls and a regional appearance with the boys golf team. “The girls have been working really hard and showed me their potential, talents, and love for the game of golf. They  have no doubt that all that hard work is put into practice and off time.” That was Coach Wiley on the topic of the girls’ hard work and hopes for the coming season.

Caroline Gibson, 12, had positive comments to say about Coach Wiley. “Coach Wiley is a wonderful coach; he has put a lot of confidence into my talents and that is what makes him a great coach and person,” Gibson  said.

Coach Wiley said, “This pandemic is new to all of us. The girls are doing their utmost best to get some practice and playing time even if we don’t finish this season.”  The work that this team has put in has shown as Gibson is leading her team in a promising way this fall. They are 13-3 as they head into Sectionals on Monday, Sept. 21.

Boys’ golf team member Josh Alley, grade 10,  also had positive words to say about Coach Wiley’s leadership. He stated, “Coach Wiley is an amazing person and coach. He has been calm and patient through the pandemic and cancellation of our season last year. He had a really good team and is hoping to go for the state title this year.”