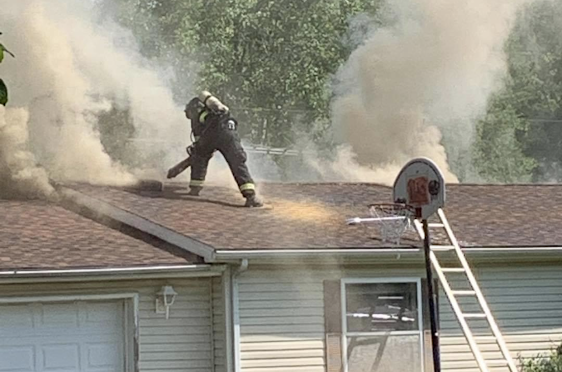 Why would someone want to be a firefighter? This is a question that could be asked of Tyler Oleksy. A 2018 GC grad, Oleksy has been working his way up since he started out at the Greenfield Fire Department. He became a cadet and has been learning all the ways to be a firefighter. Currently a volunteer firefighter, he has started to the process to become full-time.

Oleksy had very important reasons for wanting to become a firefighter.  “I got into the job because of my dad being a firefighter. I wanted to follow in those footsteps,” he said. He grew up around the department his whole life and loved hearing about the things that his dad did on the job.That is what made him so interested in it to have that job one day.

Olesky did discuss the toughest part of the job. He said, “Calling the time of death of a person that has passed after getting done working on them to save them and deciding the right time to call it. People can either be young or an older person; either way it isn’t the easiest saying that a person has passed on,” he said.

Olesky said he chose the job for the people he is around and for the mission he serves. “I picked it because of the rush you have when you either put a fire out or save someone’s life,” he said. Each time he saves someone or puts out a house fire he said he feels accomplished knowing that the fire is out or that someone has been saved from dying. He also said, “This job is pretty special to me with all the people that I have became close to.” The type of people that he works with have helped him so much throughout his life from his father passing and teaching him all about being a firefighter, he said.

Greenfield firefighter Anthony Evans talked about Oleksy’s performance and growth in the department.  “Tyler is a very hard worker and great with people as he has been here. Everyone has grown a friendship with him”. He went on, “Tyler is the type of worker that won’t give up until he makes it. Me and him have become really close. I see him as another son. He is such a great person. He works so hard for everything that he has and he never gives up.”