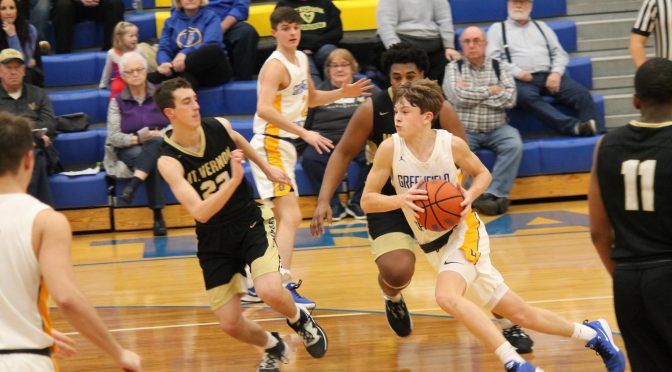 Photo Caption: Gavin Robertson, 11, (in center of photo) is the Cougar’s second-leading scorer returning to play this season and is expected to fill a leadership role several graduating seniors left.

After a 4-20 season in 2018-19, the Greenfield-Central Cougars boys basketball team showed major improvements last season under first year Greenfield-Central head coach Luke Meredith, finishing the 2019-20 season with an overall record of 12-12. The Cougars will lose five seniors from last year’s roster, who contributed greatly to the Cougars’ success. One individual who is expected to step up in place of some of those seniors and have a big role on this year’s Cougars team is Gavin Robertson, 11.

Robertson missed a chunk of last season due to an injury, playing just 14 of the team’s 24 games, but while he was available, he made an impact. In a 53-40 win over Yorktown last season, Robertson scored a season- and career-high 16 points on 5 of 9 shooting, and 4 of 6 from three. Robertson would match that with another 16-point performance later on in the season against Lebanon. With the Cougars losing so much scoring and experience, Robertson will be required to have those types of performances more often, as he’s the second leading returning scorer for this year’s team.

Although the Cougars lost five key seniors from last year’s roster, Robertson is optimistic about this upcoming season. “I think this team is capable of achieving more than what others think. We lost five seniors, most of our scoring, and lots of size, but we still have guys that have heart, play hard, and want to win. I think we can shock some people this year. Everyone has been buying into the process.” The process Robertson speaks of is the culture that head coach Luke Meredith is building within the program. “A positive culture in this program is what Coach Meredith harped on from day one and tried to install, and I would say the effects of the culture he’s built has paid off.”

Robertson has many goals for the upcoming season, individually, and for the team. “Personally, some of my goals are just to improve this year as a team from start to finish and to simply just win. A conference or sectional title is always the main goal, and I am just ready to try and prove people wrong.” He also added how he’s been preparing for the season, saying, “To get ready for this upcoming season, I have been focusing on my mindset and skill sets, training daily to try and take that next step necessary this year.”

When you hear some of his Cougars teammates speak about him, you realize the respect they have for him, and it’s easy to get a feel for the importance he will have on this team. Adam Lester, 11, who has played with Gavin since second grade, said, “Gavin is the most competitive person I’ve met on the court, and he never fails to leave his print on the game. He’ll always push you to your limit and hold you accountable, and brings the best out of you while playing with him.”

Leading returning scorer for the Cougars, Dylan Moles, 10, said, “What impresses me most about Gavin on the court is his ability to knock down shots consistently with a hand in his face. I’ve seen Gavin’s game grow a ton over the years. He’s become a much better ball handler, defender, and also gets his shot off way quicker. He’s a great teammate, and is always holding guys accountable and being a leader.” These comments reflect the positive view his teammates have of him, and the impact he has in the locker room.

The Cougars will need quite a few individuals to step up and position themselves as go-to guys in the upcoming season. As one of the leading returning scorers, featuring the hard work he’s put in during the off-season, and the desire he has to get better, Robertson definitely is expected to be one of those go-to guys that the Cougars can lean on. Greenfield-Central’s season begins Nov. 19 at home against Morristown.