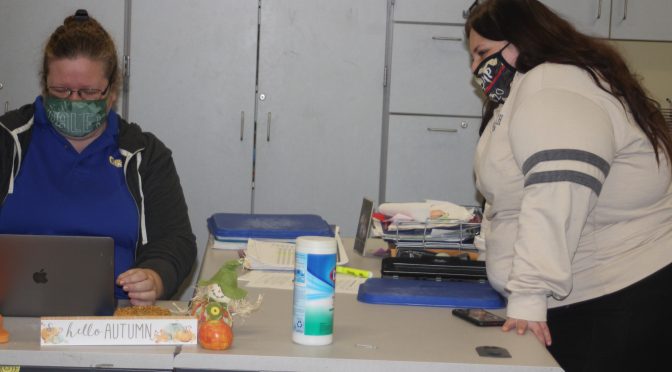 Señora Erika Amador has some very important goals for her World Language Spanish class. She said, “Of course I would love for my kids to be able to communicate well in Spanish with native speakers and others. However, my number one goal for my kids as a Spanish teacher is for them to have a more open mind toward people and cultures different from their own.”

Abby Morgan, 10, who has been taking Spanish since eighth grade, discussed what Señora Amador does to help her learn. She said, “Amador gives us plenty of notes and time to study when it’s time for a test or quiz. I never feel unprepared for anything.” Mason Poole, 11, who has been taking Spanish for three years, also talked about what Señora Amador does to help him learn. He said, “Amador helps make sure we understand before we move on.”

There have been many moments along her teaching career that have stood out. Amador, Spanish teacher, who has been teaching Spanish for 17 years, commented on what makes teaching worth it. She said, “When I see one of my kids’ faces light up because they understand a concept, when one of my kids tells me that they understand something that a native speaker said, or when one of my kids contacts me years after graduating to share how he/she is currently using Spanish that makes it worth all of the stresses that come along with teaching.”

Poole commented on what Amador does to make Spanish class fun. He said, “Amador does activities that keep you engaged and learning.” Amador talked about the funniest thing to happen while teaching. She said, “Several years back, a student mispronounced a word and misread its meaning. I can’t share what he said because it was inappropriate but it was also extremely funny. It was an honest mistake on the kid’s part that still has me laughing today.” Morgan also discussed what Amador does to make Spanish class fun. She said, “We always play lots of games in Amador’s class. It personally makes me want to study Spanish more when it’s fun.”

Amador commented on her favorite lesson to do with the kids. She said, “Teaching about the Dominican Republic is one of my favorite lessons to share with kids. Because I lived there for 2 ½ years it brings back a lot of great memories. The kids also enjoy learning about the culture and hearing about my personal experiences in the country.” She also talked about what her favorite activity to do with the kids is. She said, “One of my favorite activities to do with kids are conversation circles, where we practice a conversation entirely in Spanish, changing partners each time we finish the conversation. I love hearing the students speak Spanish and watching their confidence grow as the activity progresses.”

Amador discussed her own mentor who inspired her. She said, “Señora K, Mrs. Patricia Knasinski, was one of my many mentors. Sra. K was my high school Spanish teacher for all four years. In class she was always very passionate about teaching and found new and exciting ways to get her students speaking Spanish without fear of embarrassment when we made mistakes.”

Amador discussed how she keeps the kids’ attention. She said, “I try to keep the kids engaged by using a variety of instructional strategies, including games and real-life examples of the concepts we are studying.”

Amador also commented on how she balanced her work and home life. She said, “I love my kids at school but my family comes first. When I am not at school, I try to put school work away and focus on my home life. Then if I have some ‘free time’ at home I sneak in a little school work here and there until I hear ‘Mommy!’ ” Amador has two sons. Her oldest son is 10 years old and his name is Benji; her youngest son is 5 years old and his name is Lucas.

Morgan told a story she will remember about Amador. She said, “A memorable story about Amador would probably be when she lived in the Dominican Republic and danced with the famous baseball player, she didn’t know who he was but everyone around her did.” Amador couldn’t isolate only one memorable moment in her teaching experience. She said, “There are way too many for me to pick just one.”

Poole said that he will remember Amador’s love for her kids and for her students the most. Morgan discussed what she will remember the most about Amador. She said, “I’ll probably remember Amador’s stories the most. I feel like her always starting the class off with a story of something that has happened to her is a good way to start my morning.” As for what she wants the kids to remember about her, Amador said, “It’s not about me. It’s about them. Each one of my kids is an incredible, unique individual who has worth and a purpose. There is no one else that can be the people who they are meant to be. That is what I want them to remember.”