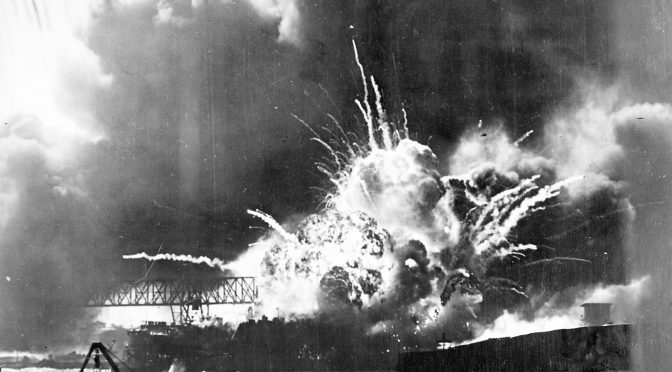 Photo Caption: This was a live Photo of the attack on Pearl Harbor from a reporter in Hawaii on Dec. 7. 1941.

On Sunday December 7, 1941 7:50 a.m., the course of American history was about to change. It was a normal day in the territory of Hawaii, specifically Pearl Harbor, Hawaii. Let’s get some background information to learn about the attack. Hawaii was not yet a state but just a large group of islands occupied by the US naval fleet. World War II was happening at the time in Europe and Asia. With Germany, Japan, and Italy seeking world domination, Hitler did not want America to get involved, but Japan had other plans. Back to the main story.

Japan knew that if the U.S. entered the war now, the US would have complete control of the seas and Japan had control of mainly islands so they knew we could easily take control. So they launched the surprise attack to destroy our naval fleet in order to prevent us from fighting back in the oceans. They succeeded in destroying a big majority of our fleet.

The First Wave: At 8:00, the kamikaze pilots showed up, all 183 of them, and struck at the airfields. “This first attack wave began bombing the hangars and parked aircraft of the island’s airfields while at the same time launching torpedoes against the US warships moored in the harbour.” (ivm.org.uk) After 5 minutes, they destroyed four US battleships with torpedoes and dropped a bomb on the USS Arizona and killed 1,177 crew.

The Second Wave: Half an hour later, a larger wave of kamikaze pilots returned to Pearl Harbor and inflicted even more damage than the last. “Within two hours, 18 US warships had been sunk or damaged, 188 aircraft destroyed and 2,403 total American servicemen and women killed.” (ivm.org.uk)

“They destroyed 8 of our battleships: the USS Arizona, Oklahoma, California, West Virginia, Utah, Maryland, Pennsylvania, Tennessee, and Nevada. After the bullets of the Kamikaze pilots shot at the vessels.” (History.com editors) The Japanese pilots targeted our battleships and flew straight into them. We were eventually available to save all except the USS Arizona and Utah. Casualties: A total of 2,403 American service men and women were killed; and over 1,000 were wounded. America soon declared war on Japan and Germany declared war on us. But, through four years of gruesome war in Europe and Asia and two nuclear bombs dropped on Nagasaki, Japan and Hiroshima, Japan, the Axis powers surrendered and the war was over on September 2, 1945. This is the story of Pearl Harbor.