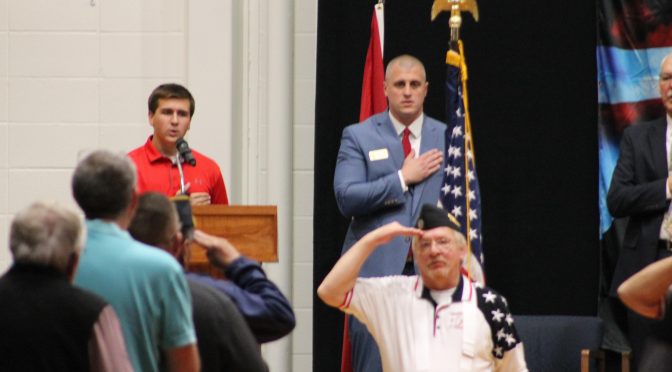 Photo Caption: A veteran and member of the Honor Guard salutes the flag during the Veteran’s Day ceremony from 2019. Also pictured are 2019 graduate Tyler Hornaday, and Mr. Jason Cary, principal.

As another Veteran’s Day passes, many people showed their love and appreciation for the people who fought for their country by celebrating the veterans’ accomplishments through kind acts.  But November 11 is only one day out of 365.  Many veterans end up homeless, hungry, jobless, and alone.  They need help and not many get it.

There are many times the men and women who served our country are forgotten and not given the help they deserve and need after they come back from helping us.  Many people ignore their problems or don’t know how to help.

Luckily, the second option is fixable.  There are many people and organizations that will help our veterans with what they need most.  Organizations like American Legion, Veterans Families United, Vietnam Veterans of America, and many more are out there doing all they can to help their country’s fierce protectors.

Likewise, the Vietnam Veterans of America organization seeks to help veterans heal and recover.  They also work hard to hold the government accountable for following or not following laws that deal with veterans’ health care and try to spread awareness and get people to acknowledge their veterans.  What really makes them stand out, however, is that they focus on changing the people’s mindset towards Vietnam veterans.  Because so many people disliked the Vietnam War, many blamed the US servicemen and women who served during this time.  To fix this, the Vietnam Veterans of America works towards convincing people to acknowledge that their Vietnam veterans are not to blame.

While these organizations and many more are working hard to help the veterans, there are still ways to help veterans with smaller acts, though that doesn’t make their impact small.  There are many stories about someone taking the time out of their carefree lives to help a veteran in need.

For instance, a man on a trip to Maryland saw a man on the street with a sign that said, “I am a homeless veteran please help,” while he was driving.  He pulled over the car and gave this veteran a twenty dollar bill.  The veteran said he was moved by his kindness and extremely grateful (“Kindness Starts With One”).

Willis Bryant, a U.S. Air Force veteran, was living under a bridge in Dothan, Alabama.  When he turned to a homeless shelter, he was told about the Priority Veteran program which is possible through a grant from the Department of Veteran Affairs.  When he got in touch, they helped him get medical help and found him an apartment to live in.

John Traffanstedt is a Vietnam veteran who is a part of Mustang American Legion Post 353 in Mustang, Oklahoma.  He owns a van which he uses to transport himself and the rest of the Mustang Legion Post 353 to other veterans’ funerals.  They work to honor other veterans in the hope that their courage and lives are not forgotten.

Some ways people can help veterans in their area range from getting together with some friends to build a house for a homeless veteran to just stopping to say “thank you for your service” to another veteran.  These small acts may seem inconsequential to the person doing them, but they really will mean a lot to the veterans.

For more ways to help veterans: