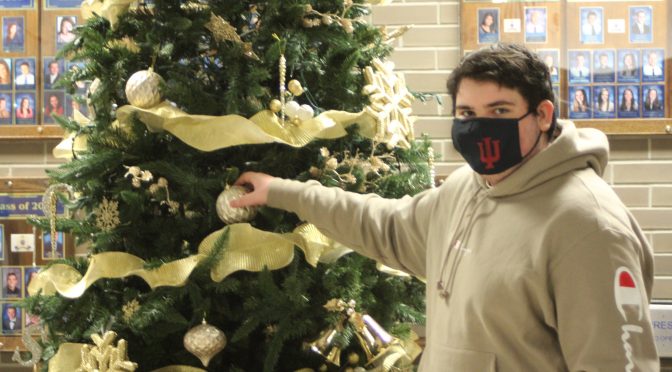 All around the world people celebrate different holidays close to the same time. For many Americans, it’s Christmas, but many don’t ever get to see or appreciate the ways other people celebrate their special winter holidays.

Christmas is celebrated on December 25. The holiday is founded on the birth of Jesus Christ, though even before Jesus was born, early Europeans would celebrate during the winter solstice. Yule was celebrated by the Norse in Scandinavia on December 21. On this day fathers and sons would bring home logs to burn; this activity could take up to 12 days. The Norse believed that with each spark of the fire a new pig or calf would be born the next year. In the early years of Christianity the birth of Jesus was not celebrated because we do not know the exact date he was born, as it was never mentioned in the Bible, though it became the universally accepted date. There are many different views on how this would come to be. December 25 was first identified as Jesus’s birthday by Sextus Julius Africanus in 221.

The eight day celebration, Hanukkah or Chanukah, commemorates the rededication of the second temple in Jerusalem. Legend says, at this temple the Jews had risen up against their Greek-Syrian oppressors in the Maccabean revolt. Jewish priest Mattahias and his five sons led a large scale rebellion against Antiochus and the Seleucid monarchy. When Mattahias died in 166 B.C, his son Judah took the helm. Within two years the Jews had successfully defeated the Syrians, pushing them out of Jerusalem. The rebellion relied on guerrilla warfare, which is when small groups of combatants engage in tactics to disarm and surprise their opponents.

Judah wanted his followers to cleanse the second temple, rebuild its altar and light its menorah. The gold candelabrum whose seven branches represented knowledge and creation were meant to burn every night. This story of Hanukkah doesn’t appear in the Torah because the events that inspired the holiday happened after it was written, though the story appears in the New Testament in which Jesus attends a “feast of dedication.” The celebration revolves around the kindling of a nine branched menorah, just like mentioned earlier. The shamash or helper is the ninth candle; it’s used to like the other eight over the course of the celebration.

Kwanzaa, unlike the other two holidays, was just created only 54 years ago, in 1966. The holiday was created by Maulana Karenga, a professor at California State University. The idea came after the Watts riots in Los Angeles, and the racial division that was apparent in LA. Karenga wanted a way to bring the African-American community together. After establishing an organization, US, he started to research African “first fruit” celebrations. Karenga combined the aspects of these many celebrations, a couple being those of the Ashanti people and those of the Zulu.

The name Kwanzaa is derived from the phrase “matunda ya kwanza;” in Swahili it means “first fruits.” The celebration is seven nights long, and on each night a child lights one of the seven candles. Afterwards one of the seven principles or Nguzo Saba is discussed. Each is a value of African culture; these contribute to the strengthening of the African-American community. Along with the seven principles are the seven symbols, which all represent something of African culture. At the end of the celebration an African feast, called Karamu, is held on December 31.

These holidays are a few of those celebrated all over the world. It’s important to shine lights on holidays that people might not hear or learn about. Christmas is a holiday many people at Greenfield-Central celebrate and a lot is already known about it, though it’s still important to look at the earlier history of Christmas.