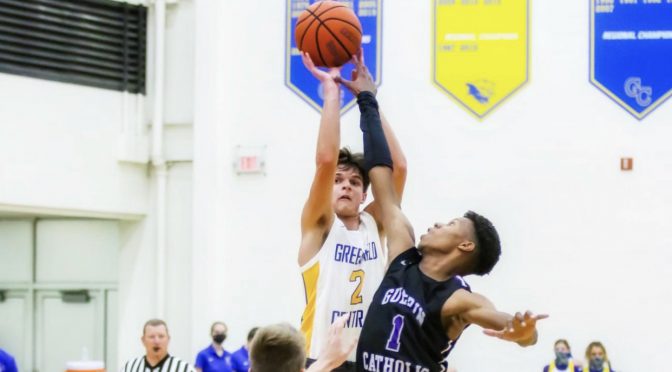 With the 2020-21 season now here, all eyes are on second year Greenfield-Central head coach Luke Meredith and the Cougars as another new chapter in GC basketball is among us. After a 12-12 campaign in Meredith’s first year at the helm, Greenfield-Central is losing five seniors who played an integral role in the success of the Cougars a year ago. Due to these losses, returning players stepping up and filling the leadership roles left behind will be a major factor in the success of this year’s Greenfield-Central team, along with staying completely invested in the culture that Meredith established in his first year as head coach.

The players on this year’s squad recognize the importance of staying bought in, and by hearing them speak about it, you quickly realize just how strong of a culture it is that Meredith has instilled in this program in the short time he’s been with the Cougars. Adam Lester, 11, said, “In the short time he’s been here, he’s already changed the culture and brought a new swag to Greenfield. He led us to a very good season last year, and even more are going to be surprised this year.” Guard Gavin Robertson, 11, also had high praise for the job Meredith has done. “Coach Meredith has done a phenomenal job to say the least, and he is one of the hungriest people I’ve ever met. His will and drive to win games as a coach was such a big factor in the success that we had last year, and it will continue to be, especially this year in particular with a young team.” With how highly the players speak of him, the impact of the job Meredith has done since taking over the program is no secret.

When it comes to the 2020-21 season, players and staff are excited, and are looking forward to the opportunity of proving any doubters wrong. Head Coach Luke Meredith said this about what the team needs to do to succeed this season. “The keys to our success hinges on players continuing to improve and relishing their new roles. We are going to play a lot of guys that quite frankly are not ready to play in varsity games, but will be called upon to play and will be given an opportunity. Many guys are in new roles and we are a young team looking to prove ourselves. Continuing to build the program, get the kids to believe we can compete, and show everyone we belong in our conference and sectional. I am excited to coach this group and hope we continue to play hard even if adversity hits us in the win/loss column. The goal is to be better in March than you are in November, and I believe we will be one of those teams.”

Coach Meredith also outlined his main goals for the team this season, saying, “The goals for our team is to uphold our standard of play. Whoever comes to watch us play needs to see that we are playing hard and competing every play. If we have “Bring the Juice” on our shooting shirts, it can’t just be a slogan; it must be a way of play. Uphold that standard and bring energy and enthusiasm on the court to represent our basketball program and continue that standard set by last year’s team. This is who we are and this is who we must continue to be to compete in our sectional and conference.”

The belief in this team isn’t just present in Meredith and the staff’s mind; the players share the same belief as well.  Robertson, the second leading returning scorer on this year’s GC team, said, “I think this team is capable of competing in every single game on our schedule. The goal is to get better each and every day, and with how much improvement we’ve made as a team during the offseason, the results will come.” Lester shared a similar belief, saying, “We’re all used to playing with each other, and the chemistry on and off the court has only grown throughout the offseason. I think we’re capable of shocking lots of people.”