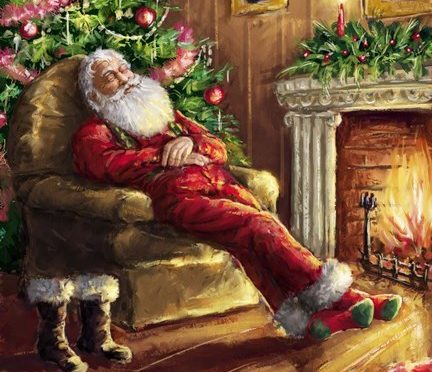 Santa Claus was passed out cold on her fireplace, and Olivia was beginning to regret coming downstairs for a snack. The large man groaned softly but didn’t move and inch. He just remained still at the base of the fireplace. Olivia couldn’t help but let her curiosity get the better of her and tip-toed over to Mr. Clause with the subtlety of an assassin. As she got closer she started to notice more and more details about Santa, Such as his large sack of presents being almost bottomless with colors not even the rainbow has. She discarded the thought of peeking at the presents and continued tip-toeing towards Santa.

When she finally reached him she got a good look at his face for the first time. His nose and cheeks were red as in the stories, his mouth surrounded by a forest of white hair. There appeared to be no damage to Santa besides the fact that his hat had fallen off. She sneakily grabbed his hat from next to him and tapped on his cheek in an attempt to wake him up. At first there was nothing but groaning but as the presses on his cheeks got harder from her impatience, he began showing signs of waking up. He wrinkled his nose and said, “Please… honey, five more minutes,” in a low voice.

Finally Oliva spoke and said, “Are you talking about Mrs. Claus?”

Her voice surprised Saint Nick and he awoke with a start. His eyes darted around the room to figure out where he was. At first he looked around panicked until he saw his presents. He grabbed the bag and resumed looking around Olivia’s living room until his eyes settled on Olivia holding his hat out in offering. Santa calmed and let out a loud sigh. He accepted his hat from Olivia and stood up.

“Why, hello there, Olivia, I apologize for waking you.” He spoke softly with a large smile on his face.

“Don’t worry, Santa I was already awake,” she corrected. “I was coming down to get a snack and saw you on the floor.” Her eyes glowed with curiosity while staring at the jolly fat man.

“Well, that’s good.” He chuckled. “I am sorry, though, it made you worry about my well-being.”

“Are you ok, Santa?” she questioned, her face souring.

“I am in tip top shape, my dear,” he reassured. “Just watch.” He began to wave his hand and light came out and took the cookies and milk Olivia had left out straight to Santa. He took a large bite and a swig to match. After his drink he let out a loud sigh. The light then took care of all of the soot that came out of the chimney upon his descent. Olivia giggled as the light twirled around her and she attempted to spin to follow it. Santa also laughed at the child’s actions and grabbed her so as to stop her. They both laughed and fell to the ground to stop the dizziness.

As their laughter died down Santa rolled up his sleeve and took a long look at his watch. He sighed and spoke to Olivia. “I’m sorry, my dear, but I must be going. I have many more houses to get to.”

Olivia looked at him and frowned, but still she nodded in acceptance. Santa patted her on the head and smiled, “I’m glad you understand. now hurry on upstairs so I can put your present under the tree.” She smiled once again and hugged Santa.

“Will you be back again next year?” she asked.

“Of course, Olivia, I’ll always come back,” he reassured me.

As Olivia looked back one more time while meandering up the stairs Santa waved one more time and said goodbye. She went halfway up the stairs and came back down to see if he had left. When she peeked again he was gone and a new present was under the tree. She smiled and returned to her room and collapsed on her bed. She slid the covers back on top of her and shut her eyes hoping to awaken next on Christmas morning.